Home / Philosophy / MYTHS FROM THE MAHABHARATA: Vol. 2: Study in Patterns and Symbols 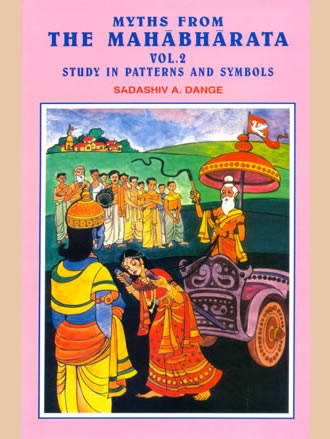 The present book forms part of the bigger plan of studying the Mahabharata, from a different point of view, the Vol. 1 being Myths from the Mahabharata-Quest for Immortality. The various mythical accounts, concerning awkward-looking Tests and Supranormal Birth, collected and faithfully preserved by the tradition of the suta-s with a belief of iti-ha-asa (?This happened so? or ?This was so?), are studied in this volume, taking into account the mythological patterns and symbols they present. The chapter on ?Tests? deals with the tests taken of the disciples breathing the ?gurukula? ?atmosphere as also the tests taken of the royal personages by the whimsical sages, the chapter not leaving off the point of sexual hospitality asked by the guest as a test of the householder. The pattern of myths wover round the motif of ?Supranormal Birth? is seen unfolding many an interesting symbol concerning birth-phenomenon, which had remained unearthed up to this time.


Preface, Introduction 1. The Tests A. Studentship B. Delicate Tests C. The Yoke and the Goad D. The Sthali of Draupadi (Sun-Grail) E. The Bloody Test F. Sex in Tests G. The Questions 2. Supranormal Birth A. The External Semen and Symbolic B. Birth from Fluids and other Parts of the Body C. Delayed Pregnancy and Striking Births, Appendices A. Durvasas-A Pattern B. Sibi?s Greatness C. Vrsadarbhi and the Seven Sages D. Kumara, Karttikeya and the Peacock, Bibliography, Index


Prof. Sadashiv Ambadas Dange, very well known in India and outside India for his contribution to the study of Indology and Sanskrit, is considered to be an authority on Vedic-Hindu myths, rituals and practices. He was invited to deliver a course of fifteen lectures on Hindu Myths at the International Institute of Semiotics and Structural Studies, arranged by the Central Institute of Languages, Mysore University (Dec. 1984-Jan 1985 and five lectures on Indian Myths and Symbols at the National Centre for Performing Arts, Bombay (Mumbai) in 1988. His numerous books include- Pastoral Symbolism from the Rgveda (University of Poona, 1970), Vedic Concept of ?Field? and the Divine Fructification, (University of Bombay, 1971), Sexual Symbolism from the Vedic Ritual (Ajanta Publications, Delhi 1979), Encyclopaedia of puranic Beliefs and Practices, Vols. I-V, (Navrang, New Delhi, 1986-90) and Towards Understanding Hindu Myths (1996), Vedic Sacrifices-Early Nature (2 Vols., 2000) and Images from Vedic Hymns and Rituals (2000)-these by Aryan Books International, New Delhi. Prof. Dange had been R.G. Bhandarkar Professor and Head, Dept. of Sanskrit, University of Bombay (Mumbai) and twice President of the Vedic Section at the sessions of the All India Oriental Conference (1980 & 1985). He was Consultant Editor for the Encyclopaedia of Human Ideas on Ultimate Reality and Meaning and Editor for the Indian Section of its Journal, Ultimate Reality and Meaning, Toranto (Canada) for more than a decade. The honours conferred on him include ? Silver Medal from the Asiatic Society of Bombay (1983), ?Special Honour? by the Uttar Pradesh Sanskrit Academy (1989), Felicitation by the State Govt. of Maharashtra (1990) and the Certificate of Honour from the President of India, to mention a few.

write a review (MYTHS FROM THE MAHABHARATA:...) Please Login!