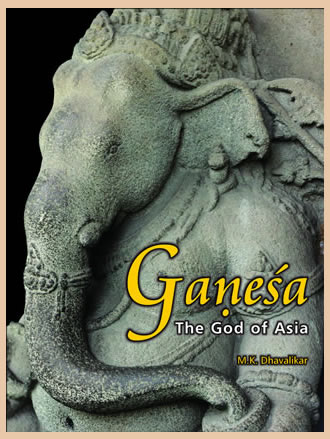 Ganesa is probably the most popular god in India among the Hindus and was accepted by the Buddhist and Jaina as also by the Tantrics. His very therianthropic form evokes curiosity and many attempts have been made to explain it on the basis of literary testimony which, however, is a later fabrication. Relevant archaeological testimony, however, was largely ignored. But it should be emphasized that only archaeology offers reliable data which has been employed here for the first time. It very convincingly explains the rise of the elephant-headed divinity from a sacred animal and an animal totem to the exalted position of a cult deity in Hindu pantheon. This long journey of the god from gaja to gana to Ganesa to Maha-Ganesa and a cult deity, as great as Siva and Vishnu, is truly amazing. His popularity in a large measure is due to his being a vighna-karta (obstacle-creator) changing into a vighna-harta (obstacle-remover), when properly propitiated. Wherever Indians went and settled, they took Ganesa with them for removing obstacles, and therefore Ganesa is the only divinity who can truly be called the God of Asia.


Madhukar Keshav Dhavalikar, M.A., Ph.D. (University of Poona), joined Archaeological Survey of India in 1953 and worked there in various capacities till 1965. He was deputed to Greece (1962) where he participated in the excavation at Pella, the capital of Alexander. He was Lecturer in Ancient Indian Culture and Archaeology, Nagpur University (1965-67); Reader in Archaeology (1967-80), Professor of Archaeology (1985-90), Deccan College (now a Deemed University), Pune; and its Director (1985-90). He has carried out several excavations of Protohistoric and Historical sites in Maharashtra, Gujarat and Madhya Pradesh. Prof. Dhavalikar has several publications to his credit besides excavation reports and research papers. They include Ajanta ? A Cultural Study (1974), Late Hinayana Caves of Western India (1984), Indian Protohistory (1997), Historical Archaeology of India (1999), Satavahana Art (2004), The Aryans ? Myth and Archaeology (2007), Socio-Economic Archaeology of India (2014) and others. Prof. Dhavalikar was President, Indian Archaeological Society (1986), Indian History Congress (1999), and Indian Art History Congress (2014). He was awarded Silver Medal by the Asiatic Society, Mumbai (2010), Tagore National Fellowship by Government of India (2011-13), Gold Medal by the Prime Minister of India (2011), Padma Shri by the President of India (2011) and the Life Time Achievement award by Government of Madhya Pradesh (2013).

write a review (GANESHA: The God of Asia...) Please Login!