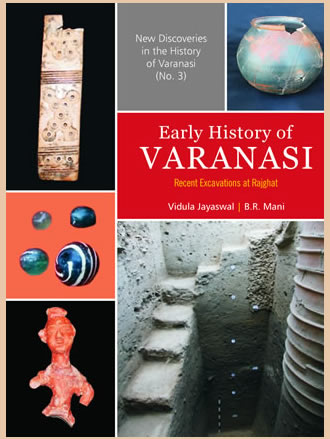 The Ganga plain has been the cradle of Indian civilization right from the ancient times. This is well attested by the archaeological findings of a number of city and village sites of the Early Historical times. The region also witnessed formation of early states and urban centres. According to ancient texts, Kashi was an important janpada, with Varanasi as its capital. On account of antiquity and continuity, it is also claimed to be one of the oldest living cities of the world. The expertise in tangible skills in technologies, arts and crafts, and spiritual attainments reflected in ideologies and institutions, have placed Varanasi at the forefront of the cultural centres of the country. The answers to many questions related to the early history of the city lie buried under its fertile plains. The recent archaeological excavations at Rajghat were aimed to estimate the dates as well as the stages of the growth of Varanasi. The findings reported in the present book have brought to light many hidden aspects of this city, which evidence origin and proficiency in a number of crafts like pottery making, ivory carving, and technologies such as glass, copper, iron, lapidary and gold smithy. The growth of Varanasi from rural to flourishing trade city, which happened during the 1st millennium bce to the early centuries of the Common Era, was the result of a continuous historical process of development. The book not only brings to light several important findings, but also adds significantly to the history of cities of the Early Historical period in the Ganga plain.


An archaeologist and a teacher of repute, Professor Vidula Jayaswal, after superannuation from the Banaras Hindu University (BHU), where she served for more than four decades, is presently occupying the prestigious Prof. R.C. Sharma Chair of Archaeology and Art History, at Janna-Pravaha, Centre for Cultural Studies & Research, Varanasi. Professor Jayaswal has not only carried out a number of archaeological and ethnological field studies, but has also been prompt in publishing the results. Author of over a dozen and a half books and research monographs, and about 70 research articles, Professor Jayaswal is known for her original contribution in Indian prehistory, ethnoarchaeology and interpretation of archaeological remains of the Historical Period of the Middle Ganga Plain. Her latest publications include Ancient Varanasi: An Archaeological Perspective and The Buddhist Landscape of Varanasi. She has also edited several volumes including Glory of the Kushans: Recent Discoveries & Interpretations and Varanasi: Myths and Scientific Studies Dr. B.R. Mani is a renowned field archaeologist, numismatist and art critic, and is the former Additional Director General, Archaeological Survey of India (ASI). He taught in BHU and Central Institute of Higher Tibetan Studies from 1978 till 1984 when he joined the ASI as Deputy Superintending Archaeologist. Since then he has been involved in the conservation of monuments in Maharashtra, Goa, Delhi and Jammu and Kashmir (J&K). He has discovered a large number of archaeological sites in these places besides also in Uttar Pradesh (U.P.) and Haryana during his explorations. He has directed more than 18 excavation projects in the country, some of which are Lal Kot and Salimgarh (Delhi), Muhammad Nagar and Harnol (Haryana), Siswania, Sankisa, Ayodhya, Lathiya and Sarnath (U.P.), Kanispur and Ambaran (J&K) and Kapilavastu. He is a member of various national and international organizations in the field and has widely trav