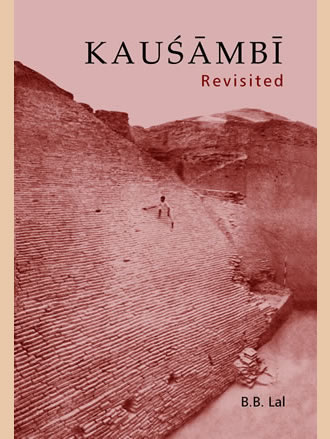 Located on the left bank of the Yamuna, at a distance of about 50 kilometres south-west of Allahabad, Kausambi is decidedly one of the most important sites of early historical India. Excavations carried out over here by the late Professor G.R. Sharma and his colleagues have brought to light many noteworthy structures and antiquities. However, some of the structures have wrongly been adjudged. For example, a fallen mass of bricks has been identified as a syena-chiti (eagle-shaped altar for sacrifice), or a medieval large-sized structure as the palace of the renowned king Udayana who in fact ruled around 500 BCE. This booklet seeks to set right these misinterpretations, giving cogent reasons in each case. This has been done not to malign anybody but to make the truth reveal itself. Satyameva jayate.


Preface Acknowledgements List of Illustrations 1. Introductory ? B.B. Lal 2. When Did Udayana Rule? In the Sixth Century BCE or the Sixteenth Century CE? An Assessment of the Dating of the Palace-complex at Kausambi ? B.B. Lal 3. Are the Defences of Kausambi Really as Old as 1025 BC? ? B. B. Lal 4. The So-called Syenachiti at Kausambi: A Fallen Brick-mass ? B.B. Lal 5. The Use of Arch in the Kushan Palace at Kausambi ? K.V. Soundara Rajan 6. The Fortification at Kausambi ? A. Ghosh 7. Stratigraphy and Chronology of Early Kausambi? A Reappraisal ? K.K. Sinha 8. To Conclude ? B.B. Lal References Index


A world-renowned archaeologist, Prof. B.B. Lal was the Director General of the Archaeological Survey of India from 1968 to 1972. In the latter year he took voluntary retirement to pursue his research programmes independently. First he joined Jiwaji University, Gwalior, as a Professor and later the Indian Institute of Advanced Study, Shimla, of which he was also the Director. Professor Lal?s excavations cover a very wide range ? from palaeolithic times to early historical. At Kalibangan, Rajasthan, he unearthed a prosperous city of the Harappan Civilization. The excavations at Hastinapura, Indraprastha, etc. have established that there was a kernel of truth in the Mahabharata, even though the epic is full of interpolations. Likewise, his excavations at Ayodhya, Sringaverapura, etc. have indicated that the Ramayana too has a basis in history. In 1961, he conducted excavations in Egypt also, which threw welcome light on Egyptian prehistory. His publications include over 150 seminal research papers, published in scientific journals, both in India and abroad: USA, UK, France, Italy, Russia, Egypt, Afghanistan, Japan, etc. Amongst his latest books are: The Sarasvati Flows On: The Continuity of Indian Culture (2002); The Homeland of the Aryans: Evidence of Rigvedic Flora and Fauna and Archaeology (2005); Rama: His Historicity, Mandir and Setu (2008); How Deep are the Roots of Indian Civilization: Archaeology Answers (2009); Piecing Together: Memoirs of an Archaeologist (2011); Historicity of the Mahabharata: Evidence of Literature, Art and Archaeology (2013); The Rigvedic People: ?Invaders??/?Immigrants?? or Indigenous (Evidence of Archaeology and Literature) (2015). In 1994, Prof. Lal was awarded D. Litt. (Honoris causa) by Institute of Archaeology, St. Petersburg, Russia. The same year he presided over World Archaeological Congress. He has been Chairman and member of several committees of UNESCO. In 1982, Mithila Visvavidyalaya honoured him with the title of Mahamahop