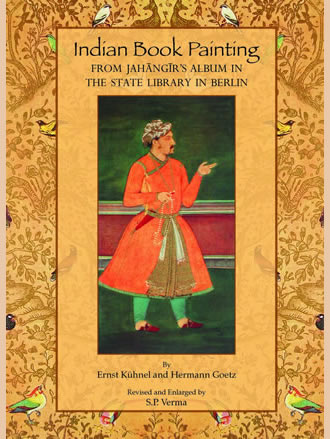 The impressive volume on Mughal miniatures, based on Jahangir?s Album in the State Library, Berlin, first published in 1923 (English trans. 1926), is given an appropriate attention through this enlarged reprinted edition. It brings an unsung rich variety of Indian painting to the fore. The present volume, resolutely monographic in approach, discovers stylistic and thematic perspective with a focus on the personal oeuvre of the eminent painters of Mughal Emperor Jahangir?s (r.1605-1627) court. His period corresponded to the golden age of Mughal art. Through the pages of this volume, we grasp the great aesthetic worth and extraordinary appeal of the Mughal portraits, vibrant bird and animal studies, superb calligraphy and magnificent ornaments. The technical skills, motifs, and the symbolism so characteristic of this period are also discussed extensively. The volume further analyses the influence of European Renaissance art on Mughal painting. The outstanding holding of the State Library, Berlin shares Jahangir?s connoisseurly enthusiasm and devotion of painting. The emperor has inscribed many of the portraits in a hand of imperial aplomb. It is understood that the present volume will lay open the Berlin collection to actuate the readers to reinterpret the miniatures afresh. Additionally, the references of an almost parallel and contemporary specimens alongside the Berlin examples will add to our understanding of the latter. Enriched by the historian?s craft, this volume is significant for the wide appeal it commands?it will not only interest art historians, connoisseurs of art, and those interested in the development of painting in South Asia but also serious scholars of Mughal history and culture studies.


Ernst K?hnel (1882-1964), an eminent scholar of Islamic art, studied law, philosophy, art history and archaeology, and wrote extensively on the subject. His notable publications are Indische Miniaturen aus den Besitz der Staatichen Museen zu Berlin (Berlin, 1946) and Mogul Malerei (Berlin, n.d. [1955]). Hermann Goetz (1898-1976), a renowned scholar of Indian art, led the museum movement in India. In 1940, he joined the Baroda Museum and Picture Gallery as Director and founded the Bulletin of Baroda Museum. Later in 1943, he joined the University of Baroda as Honorary Professor, and on his retirement in 1953, the National Gallery of Modern Art, New Delhi as Director. From 1961 until his death in 1976, he taught at the new South Asia Institute of Heidelberg University. His notable publications are Geschichte der Indischen Miniaturmalerei (Berlin, 1934); Bilderatlas zur Kulturgeschichte Indiens in der Grossmoghul-Zeit (Berlin, n.d.); The Indian and Persian Miniature Paintings in the Rijksprenten-kabinet (Rijiksmuseum), Amsterdam, Amsterdam, 1958, and Five Thousand Years of Indian Art (London, 1959). S.P. Verma (b.1942) taught at the Department of History, Aligarh Muslim University. His major works are: Mughal Painters and Their Work: A Biographical Survey and Comprehensive Catalogue (Delhi, 1994); Flora and Fauna in Mughal Art (ed.) (Mumbai, 1999); Mughal Painter of Flora and Fauna, Ustad Mansur (Delhi, 1999); Crossing Cultural Frontiers, Biblical Themes in Mughal Painting (Delhi, 2011); Taj Mahal, Monumental Legacy (Delhi, 2012), and Ordinary Life in Mughal Painting, the Evidence from Painting (Delhi, 2012).