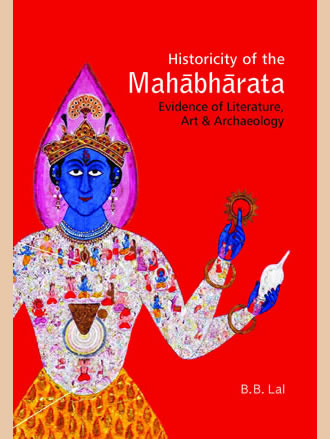 To the faithful, everything mentioned in the Mahabharata is true to the very letter, whereas the skeptic holds that the epic is nothing more than a mere figment of imagination. How, then, can one ascertain the truth? It is here that archaeology comes to our rescue. In 1951-52, Professor B.B. Lal excavated the key-site of Hastinapura, situated on the bank of the Ganga, in Meerut district of Uttar Pradesh. Over here he encountered in the lower levels a settlement which was distinguished by a characteristic pottery called the Painted Grey Ware, assignable to circa 1100-800 BCE. This PGW Culture has since been discovered at all the Mahabharata sites?a feature which binds them together. Further, the excavation revealed that a heavy flood in the Ganga destroyed a considerable portion of the Painted Grey Ware settlement at Hastinapura. This archaeological evidence is duly corroborated by the Vayu Purana which states: ?when the city of Hastinapura is carried away by the Ganga, Nichk?u will abandon it and dwell in Kausambi.? The shifting of the capital from Hastinapura to Kausambi is, in turn, supported by the fact that in the lowest levels of Kausambi has been encountered the same kind of degenerated Painted Grey Ware as had begun to appear at Hastinapura prior to its destruction by the flood. Thus, the combined evidence of archaeology and literature duly establishes that the Mahabharata is not a figment of imagination but has a basis in historical reality. At the same time, it is on record that the epic underwent eleven-time inflation 8,800 to 1,00,000 verseshence it is difficult to separate the wheat from the chaff. But let not the precious wheat be thrown away with the chaff.


Preface Acknowledgements List of Illustrations 1. Introducing the Mahabharata Text A. Introductory B. The Critical Edition of the Mahabharata 2. Impact of the Mahabharata on South Indian Literature A. Tamil Nadu B. Karnataka 3. Impact of the Mahabharata on Art in India and Abroad A. Draupadi?s Svayamvara B. Draupadi?s Humiliation C. The Pandavas in Exile D. Both Duryodhana and Arjuna Approach Krisna for Support E. The War Begins F. Lord Krisna?s Visvarupa G. Bhisma Lies on a Bed of Arrows H. Abhimanyu Caught in the Chakravyuha I. Janamejaya?s Sarpa-yajna (snake-sacrifice) 4. Impact on Coins and Inscriptions A. Coin of Agathocles B. Heliodorus Pillar Inscription C. Nasik Inscription of Vasisthiputra Pulumavi D. Khoh Copperplate Grant of Maharaja Sarvanatha E. Sultanpur Copperplate Inscription F. Perjjarangi Grant of Ganga Rajamalla I G. A 19th-century Inscription too H. An Inscription from Afar?Laos 5. Problem of the Historicity of the Mahabharata: The ?Why? of the Problem and the ?How? of the Solution A. The ?Why? of the Problem B. The ?How? of the Solution 6. Historicity of the Mahabharata: Evidence of Non-Epic Text A. Introductory B. The Atharvaveda Samhita C. The Aitareya Brahma?a D. The Brihadaranyaka Upanisad E. Panini?s Astadhyayi F. Kautilya?s Arthasastra 7. Evidence of Excavations and Explorations at the Mahabharata Sites A. Complicated Nature of the Problem B. An Archaeologist Faces the Challenge C. Excavations at Hastinapura, 1950-52 D. Chronological Horizons of the Various Periods at Hastinapura E. The Hastinapura Archaeological Evidence vis-a-vis the Mahabharata F. The Date of the Mahabharata War on the Basis of Archaeological-cum-literary Evidence G. Other Dates Examined 8. Don?t Throw the Baby Out with the Bath Water Appendix I: From Pariksit to Udayana Appendix II: Ballads have a Field Day Even Today Bibliography Index


An archaeologist of international repute, Professor B.B. Lal was the Director General of the Archaeological Survey of India. His excavation at Kalibangan in Rajasthan has brought to light a prosperous city of the Harappan Civilization. The excavations at Hastinapura, Indraprastha, etc. have established that there was a kernel of truth in the Mahabharata, though the epic is full of interpolations. The excavations at Ayodhya, Sringaverapura, etc. have shown that the Ramayana too has a basis in history. In 1961, he conducted excavations in Egypt, which threw valuable light on Egyptian prehistory. He has published over 150 seminal research papers, variously in India, USA, UK, France, Italy, Egypt, Japan, etc. Amongst his recent books are: The Earliest Civilization of South Asia (1997); India 1947-97: New Light on the Indus Civilization (1998); The Sarasvati Flows On: The Continuity of Indian Culture (2002); The Homeland of the Aryans: Evidence of Rigvedic Flora and Fauna & Archaeology (2005); Rama: His Historicity, Mandir and Setu (2008); How Deep are the Roots of Indian Civilization? Archaeology Answers (2009) and Piecing Together: Memoirs of an Archaeologist (2011). In 1982, Mithila Visvavidyalaya conferred on Professor Lal the title of Mahamahopadhyaya. In 1994, he was awarded D. Litt. (Honoris causa) by Institute of Archaeology, St. Petersburg, Russia. The same year he was elected President of World Archaeological Congress. In 2000, the President of India honored him with Padma Bhusana.

write a review (HISTORICITY OF THE MAHABHARATA:...) Please Login!