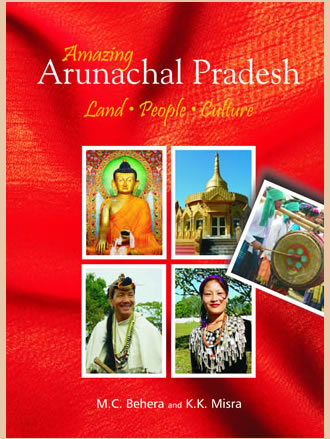 The present volume is a comprehensive illustrated survey of land and people of tribal dominated Arunachal Pradesh which attained statehood in 1987. The relationship of the land and people of Arunachal Pradesh with the Indian civilization has a very long past. This is evident from various myths and legends, Buranjis?the Ahom Chronicle, and from archaeological sites. The records of Hiuen Tsang mention the hill people of this region he had encountered during his travel to India in the early part of the seventh century. Muhammad Kasim in the days of Aurangzeb has also mentioned the Daflas (the present Nyishis) of this region. The Monpa and Khampti communities have been professing Buddhism and thereby have contact with the Buddhist centres in the country. Neo-Vaishnavism of Assam, as propounded by Sankardev, had inroad to Nocte community before the British came to the region. The existence of the pilgrim centre Parashuram Kund dates back to the time of composition of Kalika Puran and Yogini Tantra, i.e., 8th century ad. Archaeological sites at Malinithan, Bismakanagar, Naksaparvat and other places trace the connection at least to the 13th-14th century. Needless to say, the tribal communities were not living in absolute isolation, but with some degree of interaction or contact with the Indian civilization. This volume makes an illustrative presentation of the land and people along with their traditions and the transition noticed in various communities of Arunachal Pradesh for the common readers. In the process of presentation, the commonalities and differences in the lifestyle of similar and different ethnic groups have been highlighted.


Dr. M.C. Behera, Ph.D. (Economics) from Utkal University, Bhubaneswar, Odisha, is a reputed scholar on Tribal Studies. He has authored/edited/co-edited 25 volumes on socio-cultural and economic life of tribal people. He has to his credit more than fifty research papers published in various national and international journals/periodicals. He has presented about fifty papers in several seminars/conferences in the country and abroad. He is a member of many professional bodies. He was a Professor of Tribal Studies in Arunachal Institute of Tribal Studies, Rajiv Gandhi University, Itanagar, Arunachal Pradesh. Presently, he is Professor in the Centre for Indigenous Culture Study, Central University of Jharkhand, Ranchi. Dr. Kamal K. Misra is Professor of Anthropology at the Central University of Hyderabad and is currently on deputation to the Government of India as Director of Indira Gandhi Rashtriya Manav Sangrahalaya, Bhopal. He is also holding the additional charge of Director, Anthropological Survey of India, Kolkata. He had his education at Utkal University, Bhubaneswar; Jawaharlal Nehru University, New Delhi; and University of Kent at Canterbury (U.K.). He was the recipient of Utkal University Gold Medal, Commonwealth Academic Staff Fellowship and Fulbright Scholar-in-Residence Award. He was also Visiting Guest Researcher at the University of Bergen in Norway. He had earlier taught at Utkal University, Bhubaneswar and at Austin College, Sherman, Texas (USA). Dr. Misra?s research interests include Environmental Anthropology, Anthropological Linguistics, Theory in Anthropology, and Museum Anthro-pology. He has written/edited/co-edited 9 books and has published more than 50 research papers in journals of repute and anthologies. He is editor of Humankind and Journal of Anthropological Survey of India, and on the editorial advisory boards of several professional journals.