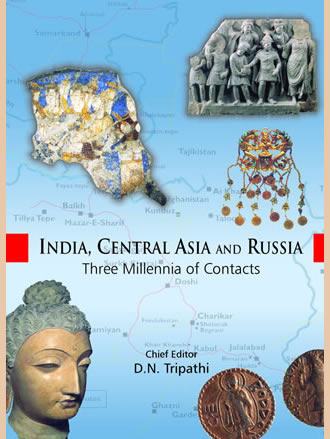 India and Central Asia had close contacts in various fields of human activities from the earliest times. Archaeological excavations of stone and bronze cultures in Central Asia have brought to light a similarity with cultures existing in northwest India of the same time. There are striking similarities between the finds from Altyntepe in southern Turkmenistan and the relics of Harappan Culture in northwest India. More concrete historical evidence can he found during Kushana period. These relations became closer in the medieval times because the founders of the Delhi Sultanate and the Mughal Empire in the 13th and 16th centuries respectively hailed from Central Asian lands. Along with conquerors and founders of the ruling dynasties came the scholars, poets, scientists and Sufi saints. Religious influence spreading from one direction to the other set in motion a process of reciprocal cultural enrichment. There was also unhindered overland trade carried by merchant caravans. Like Indo-Central Asian relations, Indo-Russian relations also go back to remote past. There have been deep and abiding links because of geopolitical and strategic considerations. However, Central Asia has been continuously a vital link in relations between India and Russia. The present volume aims to trace these contacts and gives an overview of the origin, historical development, present state of relationship and future challenges. India, Central Asia, and Russia represent a certain harmony of originally distant and distinct cultures and civilizations finding a certain post-ideological affinity based on geography, historical links and common technological and economic challenges. The core of this conceptual agreement and its policy consequences is in pluralism, secularism, multi-ethnicity and cultural synthesis.


Prof. D.N. Tripathi retired as Head, Department of Ancient History, Archaeology and Culture, and as Director, Rahul Peeth, Gorakhpur University, Uttar Pradesh. He was Fellow of Indian Institute of Advanced Study, Shimla from 1999 to 2002; and during September-October 2003, he was Visiting Professor, British Academy, UK. He was Chairman, ICHR, from 2004 to 2007. Professor Tripathi, a postgraduate in Ancient History, Culture and Archaeology from Allahabad University (1958), studied Greek language from Athens University, Greece in 1970s and took Doctorate on Bronzework of Greece, from Southampton University (UK) in 1976. Besides various foreign scholarships and participation in international conferences and seminars, he has organized important national and international seminars. Having taught for four decades and guiding doctoral and post-doctoral scholars, he has authored a number of research papers and books on Indian and Greek studies, and delivered series of lectures in universities in UK, USA and Greece. His books include Bronzework of Mainland Greece from 2600 BC to 1450 BC (1987), Archaeology and Tradition (1988), Cultural Interactions Between India and Greece (1996), and Hinduism and Hellenism (2004). Prof. R.C. Agrawal (b. 1947) served the Archaeological Survey of India (ASI) in various capacities and retired as its Joint Director General. He was Member Secretary, ICHR from 2001 to 2003 and has been closely associated with many academic bodies. He has published research papers and books on art, archeology and paintings. Dr. P.K. Shukla has served Indian Council of Historical Research (ICHR) in different capacities since 1973 and was its Member Secretary from 2004 to 2008. He has to his credit more than thirty research papers relating to peasants, tribals, and agrarian issues in Modern India, communal mobilization, politics and nationalism.