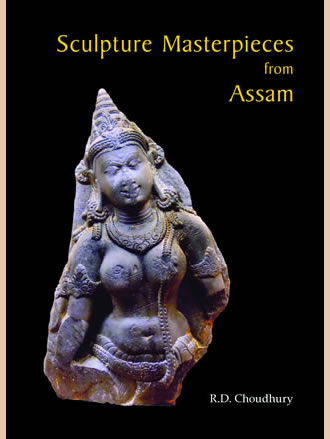 This work attempts to present an outline of the development of sculptural art in Assam. The history of the sculptural art in Assam goes back to the ?u?ga period as is proved by the recent discovery of a heavily ornamented but mutilated human terracotta figure, which by stylistic consideration can be placed in 200-100 bc. The next group of sculptures are dated in the Gupta period, which also includes a door-frame of a ruined temple, showing the figures of Ga?g? and Yamun? in minute workmanship. In around 8th-9th century, there was a development of a regional style depicting tribal affinity. However, later on, greatly influenced by the Eastern Indian School of Medieval Sculptures, the sculptural style of Assam reached its zenith in the 12th century. After the arrival of Ahoms from Myanmar, the art took a separate style. In the 17th-18th century, the art were greatly influenced by the folk element. An effort has been made in the present volume to present a coherent picture to the reader. Here, stone, metal and terracotta sculptures have been included. Images published here throw fresh light on the culture, ethnography, trade, art and religious history of the region which has been further substantiated by literary, numismatic and epigraphic evidence. In this monograph, the important sculptures are analysed with reference to their aesthetic value, style and iconography. Strikingly illustrated, this work is the result of authors' sustained interest and study on the subject for more than four decades. This important handbook on sculpture masterpieces will be indispensable for scholars, students of comparative religion, and anyone who wants to know Assam and understand its composite identity.


Born in 1944 at Patacharkuchi in the district of Barpeta, Assam, Dr. Rabin Dev Choudhury, son of late Sri Raghunath Dev Choudhury, received his school education at Kaithalkuchi and Patacharkuchi. He graduated from Cotton College in 1963. He passed the M.A. Examination in 1965 from Sagar University, M.P. in Ancient Indian History, Culture and Archaeology. Choudhury joined the Deccan College Post Graduate and Research Institute, Pune, as research scholar where he worked under Prof. H.D. Sankalia. He obtained his Ph.D. from Pune University in 1970. Dr. Choudhury joined the Assam State Museum in the Directorate of Archaeology and Museum, Assam in 1970. He obtained a Diploma from the National Museum in Museology. He was promoted to the post of the Curator of the Assam State Museum and was subsequently promoted as Director of Museums, Assam in 1983. Dr. Choudhury was appointed Director General of National Museum in 1998, an office he relinquished on superannuation in 2004. He was also the Vice-Chancellor of National Museum Institute of Art, Conservation and Museology by virtue of his position. In 2004, at the invitation of Tezpur University, he joined as Professor in the Department of Cultural Studies, from where he retired in 2006. Dr. Choudhury has published a number of books and catalogues. His important publications include Archaeology of the Brahmaputra Valley of Assam (New Delhi, 1985) and Art Heritage of Assam (New Delhi, 1998). At present, he is the Chairman of the Indian Art History Congress (IAHC) and also the Editor of Kala, the journal of IAHC.