Home / Architecture / LAL KOT TO LAL QILA: THE ARCHITECTURAL HERITAGE OF DELHI: A Journey through Time 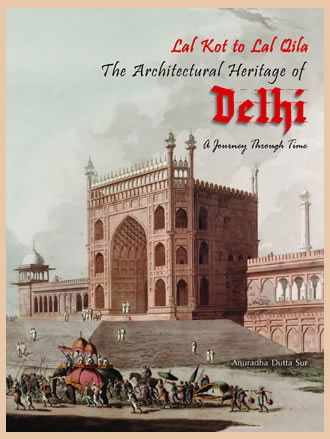 From Lal Kot to Lal Qila, the journey of Delhi is indeed a long one, spanning many centuries; and through which, one witnesses the emergence and abandonment of several capitals. It reveals not just ten fortifications, known to us as Lal Kot, Qila Rai Pithora, Siri, Tughlaqabad, Jahanpanah, Adilabad, Firuz Shah Kotla, Purana Qila, Salimgarh and Lal Qila; but innumerable, diverse buildings that mirror the distinct art styles of the city?s multi-dynastic regimes before the proliferation of the European styled architecture during British rule. These regimes were formed by the Tomars, the Chauhans, the Mamluks, the Khaljis, the Tughlaqs, the Sayyids, the Lodis, the Surs and the Mughals. Delhi?s history is speckled with the deeds of its great kings like Anangpal, Prithviraj Chauhan, Alauddin Khalji, Muhammad bin Tughlaq, Sher Shah Suri and Shahjahan, to name just a few. More significantly, their built heritage still mystify us. Each of the monuments has a story to tell that is charming enough to make one ponder about their existence in the present day. Lal Kot to Lal Qila ? The Architectural Heritage of Delhi tries to recount the significance of these structures, the various possibilities of the reasons, as also the absence of any logic sometimes behind their construction, which make the study of Delhi?s tumultuous history all the more captivating.


Preface v Acknowledgements ix List of Illustrations xi Introduction xv 1. Lal Kot: The Beginnings of an Imperial Capital at Delhi 1 2. The Earliest Monuments of the Muslim Conquerors of Delhi: 19 Qutb Minar and Other Monuments Part A. The Quwwat-ul-Islam Masjid and the Qutb Minar and a Note on the 19 Hasthstal Minar of Najafgarh Part B. The Tomb of Iltutmish; Alauddin Khalji?s Tomb and College; 30 the Alai Darwaza; the Alai Minar and the Memorial of Shah Imam Zamin 3. Mehrauli: The Heart of the ?1st? Historical City 39 4. Sultan Alauddin Khalji?s Capital at Siri 53 5. Tughlaqabad?The City of Sultan Ghiyasuddin Tughlaq: 59 The Fortress and Its Tragic Past 6. The Buildings of Sultan Muhammad bin Tughlaq 67 7. Public Works?A Legacy of Indian Rulers 75 8. Architectural Development during the Reign of Sultan Firuz Shah Tughlaq 80 9. Sufi Saints in Delhi: A Description of Some of Their Memorials 95 10. The Lodi Gardens?Its Maqbarahs and Other Monuments 104 11. Some Lesser Known Mausoleums and Mosques of South Delhi 112 12. A New Age in Medieval Delhi 121 Part A. The Establishment of the Mughal Dynasty and a Note on ?Dinpanah?, 121 the City Built by Humayun Part B. The Purana Qila and the Salimgarh Fort: The Hidden Realities 124 13. The Mausoleum of Humayun and the Neighbouring Monuments: 137 A Beginning of a Glorious Chapter in the History of Delhi 14. The Lal Qila?Shahjahan?s Citadel at Delhi 147 15. Shahjahanabad: The Living City of the Mughals 162 16. The Tombs of Abdur Rahim Khan-i-Khanan and Safdarjung 174 17. Monuments of Another Milieu 181 Bibliography 187 Index 189


Anuradha Dutta Sur was born in England in 1971. A part of her childhood days were spent in Iran, where she grew up amidst a multinational community in the pre- as well as, the crucial post-Revolution days. She took her Honours degree in History from Lady Shri Ram College, Delhi, and subsequently completed her post-graduation in History from the University of Delhi in 1994. Having lived a significant number of years in Delhi, she had the scope to study the important heritage sites of the capital and its numerous historical buildings. Her stay outside of the country gave her exposure to various aspects of Persian culture and language; and most significantly, an understanding of the antecedents of our medieval rulers. Lal Kot to Lal Qila ? The Architectural Heritage of Delhi is her first book, born out of her love for the subject in general; and a special fascination for the ruined forts and palaces of this historical city.