Home / History / / SPECIAL OFFER: A Set of Two Companion Volumes (1.Nationalism in the Study of Ancient Indian History & 2. Towards a Nationalist Narrative of Indias Ancient Past) 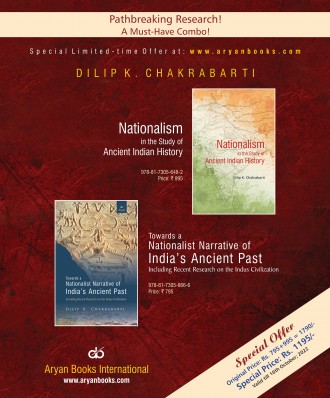 This is a set of two companion volumes of  by Prof. Dilip Chakrabarti:

1. Nationalism in the Study of Ancient Indian History

2. Towards a Nationalist Narrative of India's Ancient Past: Including Recent Research on the Indus Civilization


For Table of Contents, please look at individual books on this site. Thanks.

Dilip K. Chakrabarti (1941) is Emeritus Professor of South Asian Archaeology at Cambridge University, and Editor of the eleven-volume series ‘A History of Ancient India’ sponsored by the Vivekananda International Foundation and Aryan Books International. His academic career spans 45 years (1963-2008) in Calcutta (1963-1977), Delhi (1977-1990), Visvabharati (1980-81), Jahangirnagar (1988-1990) and Cambridge (1990-2008) Universities, and also other institutions (Allahabad, Banaras, Cambridge, Edinburgh, Tehran, USA, Paris and Armidale) where he received short-term fellowships and awards. His independent archaeological field-research has encompassed the Kangra valley, the whole of the Chhotanagpur plateau, the entire alluvial belt between Bengal and Panjab, the routes which linked the Ganga plain with the Deccan, the routes which covered the Deccan and the southern peninsula up to Cape Comorin, Rajasthan, and southern Uttarakhand. It is doubtful if anybody after Alexander Cunningham in the 19th century has so far been more familiar with India's archaeological landscape than him. He has authored 31 books (2 in Bengali) and edited 18 more volumes (4 in press), in addition to 200-odd articles and reviews. He was awarded Padma Shri in 2019. He received V.S. Wakankar rashtriya samman of Madhya Pradesh government, Gurudev Ranade award of the Indian Archaeological Society, S.N. Chakrabarti medal of the Asiatic Society of Bengal and Senerath Paranavitana award of Kelaniya, Sri Lanka. He also received D.Litt. (Honoris causa) of M.J.P. Rohilkhand University, Bareilly.