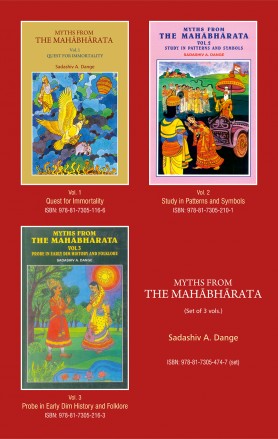 The book deals with three mythical accounts from the Mahabharata namely: (i) Garuda and the Nagas and the wager between Vinata and Kadru; (ii) Kaca, Sukra and Devayani; and (iii) The ‘Churning of the Ocean’. It presents a detailed study of these accounts and proposes that they have deeper ethnosocial implications.

The author has traced these mythical accounts from the early Vedic through the later literature, which are subjected to comparison with tribal and sculptural evidence, both from India and outside.

Vol. 2 - Study in Patterns and Symbols:

The present book forms part of the bigger plan of studying the Mahabharata, from a different point of view, the Vol. 1 being Myths from the Mahabharata—Quest for Immortality. The various mythical accounts, concerning awkward-looking Tests and Supranormal Birth, collected and faithfully preserved by the tradition of the suta-s with a belief of iti-ha-asa (“This happened so’ or “This was so’), are studied in this volume, taking into account the mythological patterns and symbols they present.

In this volume are unearthed through myths some iti-ha-asa records, which shed light on the facts and incidents of the hoary past, as yet shrouded in mystery. The iti-ha-asa records through myths, such as those gathered round the sage Agastya and those of the advent of the river Ganga, can be taken as breathing the ‘true history’ from the modern day point of view. Some iti-ha-asa records in the Mahabharata as seen through the tales of “Metamorphosis” and the “Miscellaneous Tales” lead us to the study of ‘patterns’ and are a help to explain many a myth. The Appendices serve as searchlight on some myths and folktales.


Prof. Sadashiv Ambadas Dange is very well known in India and outside India for his writingsthose concerning Vedic and Puranic myths, rituals and practices. He was R.G. Bhandarkar-Professor, and Head, Deptt. of Sanskrit at the Bombay University. For his contribution to the study of Sanskrit and Indology he was honoured by the Asiatic Society of Bombay, the States of Maharashtra and Uttar Pradesh and by the President of India with the Certificate of Honour.

Prof. Dange’s numerous publications include Towards Understanding Hindu Myths; Legends in the Mahabharata; Vedic Concept of ‘Field’ and the Divine Fructification, Sexual Symbolism from the Vedic Ritual; Encyclopaedia of Puranic Beliefs and Practices (in five volumes), and others.

write a review (Myths from the Mahabharata...) Please Login!