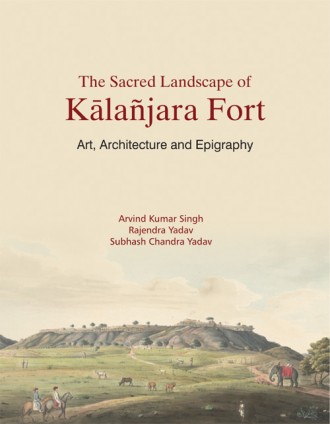 Reputed to be one of the most sacred landscapes, an abode of Siva—where Siva ‘conquered kala, the force of decay and destruction’—Kalanjara hill persists as one of the strongest forts in the country. It faced a number of crucial battles for possession, but it was more than a fort and a political centre. The hill has been a sacred tirtha distinguished as a symbol of cultural and religious majesty. Its composition was the result of two diverse religious faiths—the ‘elite’, if one may address the Brahmanical pantheons adapted by the progressing societies, and the magico-religious practices of the Adivasis. The ruling king also honoured the faith of the Adivasis (mainly Pulindas) and carved out colossal images of Lord Siva and other deities associated with local and tribal beliefs. The pleasant location of the Kalanjara hill in the midst of the Vindhyan forest attracted ancient sages for religious practices. The most favoured deity of this hill-fort is the ageless Nilakantha installed in a cave shrine, which exemplifies the exclusive progression from cave to structural addition, and it is one of the oldest living temples in the country and the world. Being a complex of many religious spots, it attracts both the royal and common worshippers, and even at present a huge mass of people come here during festivals.

Scholars of historical and cultural studies admit that religious landscape studies need to be attempted at a large scale if the rich heritage of our country is to be projected in its totality. Kalanjara forms the nucleus of such a sacred landscape, which crosses multiple cultural boundaries, both in time and space, and has great potential for a meaningful study of the past as well as the present culture of Bundelkhand-Vindhyan region in particular, and Central India in general.

The historical growth of material expressions of religious meanings and artistic generosity, acculturation of styles of carvings, fusion of mythology, and institutionalization of a Saiva-pitha are well documented here. The present volume brings to light the available information in forms of art, architecture and epigraphs, which has been assimilated by specialists in the field of palaeography, epigraphy and art history. The interpretation of information in terms of reconstruction of the religious landscape adds further value to this study. The discussion and synthesis of the collected information from this sacred landscape has been weaved in a way that will offer an interesting and thought-provoking reading to the scholars and would certainly be useful to historians and researchers of cultural studies.

Dr. Arvind Kumar Singh (b. 1959) is Professor and Head of the Department of Ancient Indian History, Culture and Archaeology, Jiwaji University, Gwalior. With the academic and administrative responsibilities of the university, he is involved in teaching and research, and has published over 150 research papers in reputed national and international journals. He also has twenty-one books and four edited volumes to his credit. He has also been the chief editor of a bi-annual journal entitled Puranveshana: Indian Journal of Archaeology and Tradition of which six issues have been published so far. His passion for palaeography and epigraphy has resulted in the discovery and study of thousands of epigraphs from northern Madhya Pradesh, Uttar Pradesh, Bihar, and other areas. Due to his efforts, in addition to the development of Nagari script, inscriptions of Lichchhavis, Gahadvalas, as well as of the districts of Gwalior, Datia, Shivpuri, Bhind, Morena and Sheopur are available in book form.

Dr. Subhash Chandra Yadav (b. 1974) is Regional Archaeological Officer of Varanasi Region in U.P. State Archaeology Department, Lucknow. He has not only surveyed different areas of Saharanpur, Muzaffarnagar, Meerut, Varanasi, Jaunpur, Mirzapur and Sonbhadra of Uttar Pradesh besides some areas of Haryana and Rajasthan but has also prepared their reports. Besides exploration