Home / History / / Indraprastha: The Earliest Delhi Going Back to the Mahabharata Times 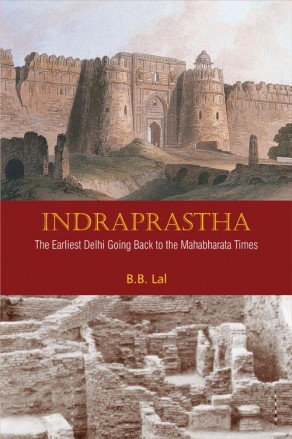 In Delhi, as one moves southwards from the Pragati Maidan, along the Mathura Road, one sees on the left the fortification walls of Purana Qila. These were built by Humayun/Sher Shah along the periphery of a 10-metre high mound. In the revenue records the site is mentioned as Indrapat and local tradition identifies it with Indraprastha of the Mahabharata times.

Keen to find out the truth, in 1954-55 the author laid out a trench in the southern part of the mound and found shards of the Painted Grey Ware which is the characteristic ceramic industry met with at all the sites associated with the Mahabharata story. This discovery was confirmed by subsequent excavations as well. These excavations revealed that from the Mahabharata times (circa 1000 bce), the site continued to be occupied up to the British times —a span of 3000 years. Thus, Indraprastha is the earliest and longest-lived city of Delhi.

The book presents this glorious panorama.

I. In the Mahabharata

II. In the Jatakas

Period III. Sunga, from Circa 200 bce to the Beginning of the Common Era.

VI.    Historicity of the Mahabharata


Born in 1921, the year when coincidentally the discoveries at Harappa threw, in a single stroke, the antiquity of Indian civilization back to the 3rd millennium bce, Professor B.B. Lal had the privilege of excavating, during 1961-69, an equally important site of the Harappan Civilization, namely Kalibangan, in the Sarasvati basin. Besides throwing up many new features, this site has given to the world the earliest agricultural field, dating back to circa 2800 bce.

With an exceptionally brilliant academic career, culminating in a first class first in M.A. (Sanskrit) from the University of Allahabad, Lal joined the Archaeological Survey of India in 1946 and rose to become its Director General in 1968. However, the heavy administrative work left no time for research and hence he took voluntary retirement in 1972, joined the Jiwaji University, Gwalior, and thereafter moved on to the Indian Institute of Advanced Study, Shimla, of which he was also the Director.

Lal’s excavations at several sites, nearly two dozen books and about 150 critical papers published in scientific journals all over the world have brought him laurels from the academia, which include Vidya Varidhi from Nalanda Mahavihara, Mahamahopadhyaya from Darbhanga University, D. Litt. from Institute of Archaeology, St. Petersberg, Russia, and another D.Litt. from Deccan College, Pune. In 2000 he presided over World Archaeological Congress and in the same year was awarded Padma Bhushan by the President of India.

Professor Lal entered his 100th year on May 2, 2020. On this occasion, the President of India, Hon’ble Ram Nath Kovind, felicitating him observed: “I am happy to learn that National Monuments Authority and Prof. B.B. Lal Centenary Committee are celebrating the centenary of Prof. B. B. Lal, the globally renowned archaeologist and a living legend. He is well-known for his work on sites related to Indus Valley Civilization, Mahabharat an