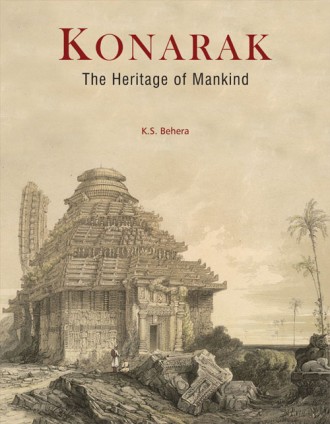 In the Indian state of Odisha near the shore of the Bay of Bengal, stands the great Sun Temple of Konarak, now in ruins. Built in the 13th century by Narasimha I of the Eastern Ganga dynasty, the temple once served as a landmark for the European sailors, who called it 'The Black Pagoda' to distinguish it from 'The White Pagoda' or the temple of Jagannatha at Puri.

The temple with its sanctuary (deula) and the audience hall (jagamohana) was designed as the mighty chariot of the Sun god with its twenty-four magnificent wheels, drawn by seven horses. In front of the jagamohana exists the remains of the hall of dance (natamandira) covered with beautiful figures of dancers and musicians.

The surface of the temple is adorned with many reliefs reflecting the life and culture of the people when it was built. Konarak, the greatest of Odisha's monuments, is also one of the most glorious achievements of the mankind as a whole.

Since the remains were first studied early in the 19th century, a considerable amount of writing has appeared on Konarak. Now, however, for the first time, appears a monograph in which all aspects of Konarak are treated in depth – its religious significance, history, architecture and sculpture.

The book tries to depict, in all its details, the art and architecture of the temple in a broader Indian framework, as well as in the context of regional developments. The monograph provides reinterpretations of already known facts, and is based on the latest research on the subject. The Appendices towards the end of the book provide interesting additional information on the subject.

It is hoped that this comprehensive monograph may encourage art lovers throughout the world to come to Konarak and help them appreciate the artistic significance of this priceless treasure in the right perspective.

K.S. Behera (1939-2008), was born in Angul, Odisha. He was educated at Angul High School, Angul and Ravenshaw College, Cuttack. He earned M.A. in History in 1960 from Utkal University with first position. He obtained Post-Graduate Diploma in Archaeology from the School of Archaeology, Archaeological Survey of India, New Delhi. He was awarded the D.Litt. by Utkal University for his study on Konarak.