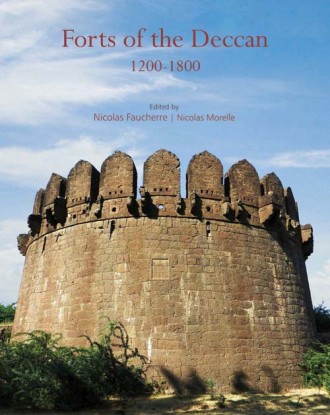 The medieval and modern period of Deccan history offers an unparalleled range of research topics for historians, archaeologists and architectural historians focusing on fortifications, such as those who have contributed to this volume. The Deccan region preserves a large number of comparatively well preserved fortified sites, some familiar and now fairly well documented, like the great dynastic centres of Warangal, Hampi-Vijayanagara, Bidar and Golconda, others only recently identified and investigated, like the military outposts of Sagar, Naldurg, Torgal and Chitradurga.

Between the 13th and 18th centuries, Deccan was mostly divided between independent polities, competing with each other for well-watered lands, natural ressources, and control of routes leading to the lucrative Arabian Sea and Bay of Bengal ports. In addition, there were intruders from northern India, from the Khaljis and Tughluqs to the Mughals, attracted by the region’s vast wealth. It is hardly surprising, therefore, that Deccan rulers had always to be concerned with the safety of their dynastic capitals and military outposts.

This book aims to define the types of fortifications and their evolution with the adaptation to new weapons, such as artillery.

The different contributions are wide ranging in terms of the material examined, approaches and methods, as well as the state of research, from essays on ‘water harvesting’ and hydrology or early surveys of border forts to an analysis of the symbolism of urban planning at Warangal.

It is hoped that this volume and the revival of interest in the forts of Deccan will lead to increased enquiry and research in the times to come.

2.    Development of Artillery and Firearms in Deccan: Evidence from Daulatabad Fort

4.    Citadel, Capital and Cosmogram: The Fortified City of Warangal

5.    The City and Fortress of Daulatabad: Stones and Masonry

7.    New Considerations on the City of Bidar: Integration and Conflict

11.    Naldurg, a Border Fort under the Rule of the Adil Shahi Sultanate


Dr. Nicolas Morelle, Archaeologist specialising in India. Associated researcher, LA3M, UMR 7298 CNRS, MMSH (Aix-en-Provence, France). After studies on crusader fortifications and influences between East and West in terms of construction techniques and military architecture, he studied technical interactions in Indian fortifications as part of his PhD thesis on the evolution of military architecture in the Deccan forts of Firozabad, Torgal, Naldurg and Bellary in 2018. In this context, he collaborated with several Indian institutions, including the Institute of Malik Sandal in Bijapur, to study Deccan forts.

Dr. Nicolas Faucherre, Professor of History of Art and Medieval & Modern Military Architecture, AMU, LA3M, UMR 7298 CNRS, Aix Marseille University (Aix-en-Provence, France). He is one of the most eminent specialists of classical fortification in France. He also teaches in Paris, at the Ecole de Chaillot (training of heritage architects) and at the Ecole du Louvre (military archaeology). His research, in addition to his PhD thesis on the citadels of the kings of France, Charles VII and Louis XI, led him to explore the world of the Vauban fortifications: as coordinator of the Vauban Year in 1982 and as historical advisor at the Musée des plans-reliefs de Paris between 1987 and 1992.

Frequently sent abroad for studies and expertise, he was interested in Byzantine and Mediterranean and Asian fortifications, for which he carried out numerous missions in Greece, Turkey, Jordan, Syria, Lebanon, Bahrain and India. He is an expert at UNESCO for fortified heritage.