Home / History / / FORGOTTEN VOICES OF THE JAPAN LAAN: The Battle of Imphal and the Second World War in Manipur 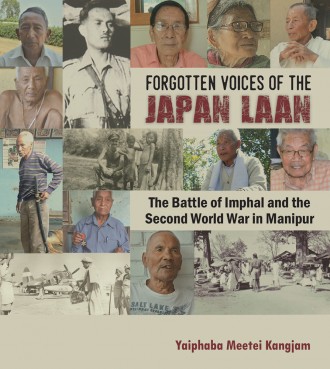 The book takes the reader back to a little heard period in Manipur’s recent history but one which is marked by parallel trauma – the place’s World War II experience. There is a growing volume of scholarship on this battlefield now and the extent of this trauma is beginning to come to light. Till recent times, most of these accounts and interpretations have been either purely military treatises or else accounts from the perspective of the victors, the British army and administrators. This book is important as it gives an account of these battlefields by local Manipuri residents on whose courtyards these fierce and bitter battles were fought. As to the intensity of the conflict here, it may be recalled that in 2013, a vote taken by the National Army Museum, London, ranked it as the most important for the British in their entire history. A defeat here would have not only changed the complexion of the WWII in Asia where Japan was already acquiring a visage of invincibility, but perhaps resulted in an ignominious exit for the British from its prized Indian colony where there was already a struggle for an end to their rule. This is especially so as Netaji Subhas Chandra Bose’s Indian National Army was also fighting alongside the Japanese. The book is a collection of testimonies by surviving witnesses of the war. Many who saw the war are no more, and those who the author managed to speak to, are also in their 80s. In another decade or so, nobody from that generation would be around. This being so, this book will be a very valuable resource for future researchers into the nature and impact of those traumatic war years.

Yaiphaba Meetei Kangjam (Yai) is passionate about Manipur and its rich history. In particular, it never ceases to fascinate him that the environs of his hometown, Imphal, were the setting for one of the greatest battles of all time during the Second World War. He has extensively researched the Battle of Imphal and the more he learns, the more he realises how much more there is to discover – not just about Imphal, but also its twin battle at Kohima in 1944, and indeed the entire Burma Campaign.

Yai is a part of Battle of Imphal Tours which offers Second World War-themed battlefield tours in North-east India and Myanmar (Burma). He also organises contemporary tours around Manipur through his venture Imphal Walks, besides being a founding member of the Manipur Association of Tour Operators (MATO). Yai holds a Master’s degree in Tourism Management; his thesis was on Battlefield Tourism, with special reference to Manipur.

write a review (FORGOTTEN VOICES OF THE...) Please Login!