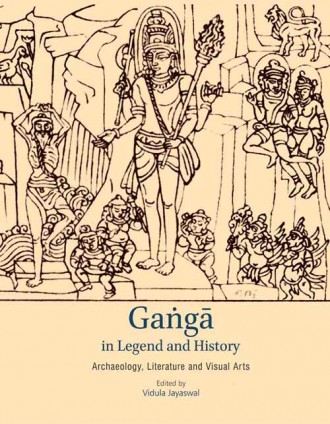 River Ganga to an Indian mind is significant in more than one way. She is the foster mother nurturing man and his settlements, thus, ma Ganga; it is pure and pious, for its physical properties, as well as religious status, thus is a devi (deity). The spade of archaeologists and the narrations in the scriptures reveal that the valley of Ganga was also the cradle of Indian civilization.
It is therefore not surprising that Ganga valley witnessed continuous growth of human endeavours right from the Stone Age to the modern times. Ganga plain, therefore, had to be examined in historical as well as cultural perspective. This was attempted twice by Jnana-Pravaha, the Centre for Cultural Studies and Research at Varanasi. The first seminar focused on Samskrit Sahitya mein Ganga, while the recent one, Significance of Ganga in Indian Culture (2017), had wider coverage. The present volume is based on the contributions of both of these academic meetings. This book incorporates learned deliberations of scholars on three themes in literature, historical growth of the region as revealed by archaeology, and visual presentation of the river in art compositions.
The early cultures of Ganga valley reveal history of development of technologies, ideologies and institutions. Eminent practising archaeologists, Dr. Bhuvan Vikrama and Ms. Sushri Mishra Vikrama, Prof. Vidula Jayaswal, Dr. B.R. Mani and Prof. Durga Basu, have outlined the historical personality of the Upper, Middle and Lower Ganga plain.
The intangible manifestations of Ganga which has seeped deep in our society continue in the form of mythology and legends. Scholars per excellence, Prof. Reva Prasad Dwivedi, (late) Dr. R.C. Sharma, Prof. Yugal Kishore Misra, Prof. Gangadhar Panda and Dr. Pranati Ghoshal, record and interpret textual narrations of Vedic texts, Epics, compositions of Kalidas, and Ganga-lahari (late medieval text).
The classical examples of pictorial depiction of legends related to this holy river have been discussed by (late) Rai Anand Krishna, Dr. S.S. Biswas, and young scholars, Drs. Niraj Pandey, Chandraneel Sharma and Meera Sharma.
The Presidential Address by Dr. Prithvish Nag deals with the international policies regarding Ganga water, which inspite of being of utmost significance, is less addressed.
In the present scenario, when there is much concern about cleaning and saving the lifeline of Indian culture river Ganga, this book would be useful to general readers as well as scholars, as it provides authentic information on the theme.


An archaeologist and a teacher of repute, Professor Vidula Jayaswal, after superannuation from the Banaras Hindu University, where she served for more than four decades, is presently occupying the prestigious Prof. R.C. Sharma Chair of Archaeology and Art History, at Jnana-Pravaha, Centre for Cultural Studies and Research, Varanasi. She has also served Archaeological Survey of India as Deputy Superintending Archaeologist for a short period. Recipient of various scholarships and fellowships, she received specialized training in archaeology and anthropology at the University of Berkeley.
Professor Jayaswal has not only carried out a number of archaeological and ethnological field studies, but has also been prompt in publishing the results. Author of over twenty books and research monographs, and about 70 research articles, Professor Jayaswal is known for her original contribution in Indian prehistory, ethnoarchaeology and interpretation of archaeological remains of the Historical Period of the Middle Ganga Plain. Besides, she could also infuse scientific temper to the study of archaeology, through some major projects financed by the Ford Foundation (USA), and the Department of Science & Technology (Government of India), of which she has been the Principal Investigator and Coordinator. Her recent publications include–The Buddhist Landscape of Varanasi; Early History of Varanasi: Recent Excavations at Rajghat (with B.R. Mani); Varanasi and Ganga: Geomorphological and Archaeological Investigations at Ramnagar (with Uma Kant Shukla & Meera Sharma) and The Sacred Landscape of Mundeshwari: The ‘Oldest Living’ Temple (with Arvind Kumar Singh & Meera Sharma). She has also edited several volumes including–Glory of the Kushans: Recent Discoveries & Interpretations and Varanasi: Myths and Scientific Studies.

write a review (GANGA IN LEGEND AND HISTORY:...) Please Login!