Home / History / / FLIGHT OF DEITIES AND REBIRTH OF TEMPLES: Episodes from Indian History 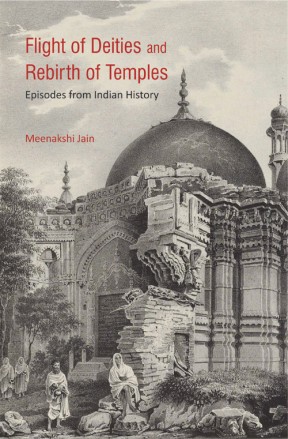 This work examines the medieval response to temple destruction and image desecration. While temples were destroyed on a considerable scale, also noteworthy were the repeated endeavours to reconstruct them. In each instance of rebirth, the temple retained its original name, even though there was a visible downsizing in its scale and grandeur. The Keshava temple at Mathura, the Vishwanath temple at Kashi, the Somnath temple in Saurashtra, the Rama mandir at Ayodhya were among the shrines continually restored, well after Hindus had lost all semblance of political power. The Bindu Madhava, the most important Vishnu temple in Varanasi, was demolished in 1669 and a mosque constructed in its place. The temple now bearing the name Bindu Madhava is a modest structure in the shadow of the mosque, but continues the traditions associated with the site. Intriguingly, mosques built on temple sites often retained the sacred names —Bijamandal mosque, Lat masjid, Atala masjid, Gyanvapi mosque, and not to forget, masjid-i- janamsthan.

Equally worthy of study was the fate of images enshrined in temples. Many were swiftly removed by anxious devotees, many more were hurriedly buried; some remained on the move for decades, till such time they could be escorted back to their abodes. In several cases, images were damaged in flight. Countless images were lost, as their places of burial were forgotten over time. That necessitated the consecration of new images in more peaceable circumstances. So there were temples of the tenth-eleventh centuries, which housed images instated in the sixteenth. In situations where neither temple nor image could be safeguarded, the memory endured, and a shrine was recreated after an interval of several centuries.

12.  Attacks on the South Commence

13.  Plight of Temples and Deities

15.  Resurrection of Deities in South India


Meenakshi Jain is currently Senior Fellow of the Indian Council of Social Science Research. Her recent publications include The Battle for Rama: Case of the Temple at Ayodhya (2017), Sati: Evangelicals, Baptist Missionaries and the Changing Colonial Discourse (2016), Rama and Ayodhya (2013), and The India They Saw. Foreign accounts of India from the 8th to mid-19th century, 3 vols., (2011).

write a review (FLIGHT OF DEITIES AND...) Please Login!