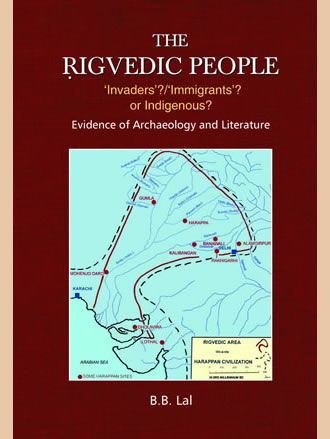 For several decades it has been orchestrated that there was an ?Aryan Invasion? of India which destroyed the Harappan Civilization. However, as shown in this book (pp. 10 ff.), there is no evidence whatsoever of any invasion or of the presence of an alien culture at any of the hundreds of Harappan sites. While one is glad to note that the ?Invasion? theory is dead, it is a pity that it is being resurrected in a new avatar, namely that of ?Immigration?, of people from the Bactria-Margiana Archaeological Complex of Central Asia, who, the proponents think, were nomadic Aryans. This book advances cogent arguments to demonstrate that this new theory too is totally wrong (pp. 19 ff.). For all this mess, the dating of the Rigveda to 1,200 BCE by Max Muller is squarely responsible. The combined evidence of hydrology, archaeology and C-14 method of dating shows that the Rigveda is assignable to the 3rd-4th millennium BCE (pp. 118 ff.). The Rigveda (X. 75. 5-6) also tells us that the Vedic people occupied the entire territory from the Indus on the west to the upper reaches of the Ganga-Yamuna on the east. Archaeologically, during the aforesaid period and within the above-noted territory, there existed one and only one civilization, namely the Harappan. Hence, the Harappan Civilization and the Vedas are but two faces of the same coin (pp. 122-23). Further, the evidence from Kunal and Bhirrana (pp. 54-55) establishes that the roots of this civilization go back to the 6th-5th millennia BCE, indicating thereby that the Harappans were the ?sons of the soil? and not aliens. Thus, the Vedic people, who were themselves the Harappans, were Indigenous and neither ?Invaders? nor ?Immigrants?.


Preface vii Acknowledgements xiii List of Illustrations xv 1. Introductory 1 2. The ?Aryan Invasion? Theory: An In-depth Analysis 10 3. The ?Aryan Immigration? Alternative Too 19 Under Scanner 4. A Review of the Evidence of Flora Supposedly 34 Supporting the ?Aryan Immigration? Thesis 5. Identification of the Sarasvati: The River par 41 excellence (?Naditama?) during the Rigvedic Times 6. From Pit-dwellings to Fortified Cities: The Evolution 49 of Civilization in the Sarsvati Basin 1. Introductory 49 2. Stage I: The Pit-dwellers 50 A. Bhirrana 50 B. Kunal 56 C. The Cholistan Region 57 3. Stage II: They Emerge Out of Pits and Start 61 Building on Land-surface A. Bhirrana 61 B. Kunal 62 C. Rakhigarhi 65 D. Dhalewan 71 4. Stage III: The Concept of a Peripheral Wall 71 Around the Settlement Comes into Being A. Kalibangan 72 Chronology 85 B. Banawali 87 5. Stage IV: Finally, ?The Citadel? and ?The Lower 89 Town?: Full-fledged Urbanization A. Banawali 89 B. Kalibangan 93 7. The Civilization in the Sarsvati Basin vis-?-vis 118 the Rigveda 8. In Retrospect and Prospects 124 Appendices I: Did Some Vedic People Emigrate Westwards, 127 Out of India? II: Let Not Preconceived Notions Blur Our Vision: 135 The Case of Kalibangan ?Fire-altars? III: An Examination of Objections Against the Vedic- 144 Harappan Equation IV: The Continuity of Indian Civilization 156 Bibliography 171 Index 177


A world-renowned archaeologist, Prof. B.B. Lal was the Director General of the Archaeological Survey of India from 1968 to 1972. In the latter year he took voluntary retirement to pursue his research programmes independently. First he joined Jiwaji University, Gwalior, as a Professor and later the Indian Institute of Advanced Study, Shimla, of which he was also the Director. Professor Lal?s excavations cover a very wide range ? from palaeolithic times to early historical. At Kalibangan, Rajasthan, he unearthed a prosperous city of the Harappan Civilization. The excavations at Hastinapura, Indraprastha, etc. have established that there was a kernel of truth in the Mahabharata, even though the epic is full of interpolations. Likewise, his excavations at Ayodhya, Sringaverapura, etc. have indicated that the Ramayana too has a basis in history. In 1961, he conducted excavations in Egypt also, which threw welcome light on Egyptian prehistory. His publications include over 150 seminal research papers, published in scientific journals, both in India and abroad: USA, UK, France, Italy, Russia, Egypt, Afghanistan, Japan, etc. Amongst his latest books are: The Sarasvati Flows On: The Continuity of Indian Culture (2002); The Homeland of the Aryans: Evidence of Rigvedic Flora and Fauna and Archaeology (2005); Rama: His Historicity, Mandir and Setu (2008); How Deep are the Roots of Indian Civilization: Archaeology Answers (2009); Piecing Together: Memoirs of an Archaeologist (2011); Historicity of the Mahabharata: Evidence of Literature, Art and Archaeology (2013). In 1994, Prof. Lal was awarded D. Litt. (Honoris causa) by Institute of Archaeology, St. Petersburg, Russia. The same year he presided over World Archaeological Congress. He has been Chairman and member of several committees of UNESCO. In 1982, Mithila Visvavidyalaya honoured him with the title of Mahamahopadhyaya. In 1991, two distinctions were conferred on him, respectively by the Indian Science Congress and A