Home / Reference/Multi-volume Sets / THE CIVILIZATIONS OF THE EAST: An Indepth Study of Asiatic Arts & Cultures from the Earliest Times to the Dawn of Modern Era (Set of 4 Vols.) 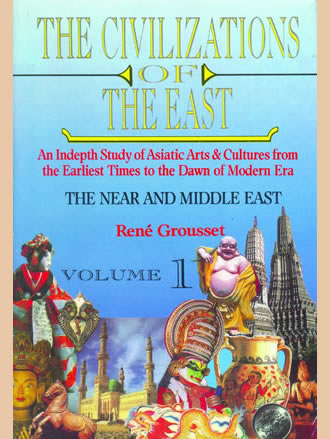 The Civilizations of the East is a stimulating and perceptive survey of Oriental civilizations and traces their evolution from the earliest times to the drawn of modern era. The book provides an unparalleled source of insight into Asiatic arts and cultures. It is a study of Eastern ideals and schools of art and contains a detailed account of archaeological and artistic data of the continent. The book also provides a guiding thread among the various styles and periods and gives an adequate and correct idea of the various schools and works. The history of arts is presented in its due relation to general history and shows the continuity and interpenetration of the various aesthetic ideals. Divided into four volumes the work is copiously illustrated. The first volume is devoted to the Near and Middle East, in which is included Iran. The second is devoted in the Indian World, both Muhammadan and non-Muhammadan, including Farther India and Malay Archipelago, the third to China and Central Asia and fourth to Japan and Tibet. An extensive index is included at the end of last volume. Perceptive, insightful, selective and lavishly illustrated, the book is an indispensable reference tool. The simplicity and clarity of its presentation makes it enchanting to read. The book will prove to be an invaluable asset not only to the academicians, art historians, archaeologists, orientalists, researchers and libraries but also to the lay reader.

write a review (THE CIVILIZATIONS OF...) Please Login!