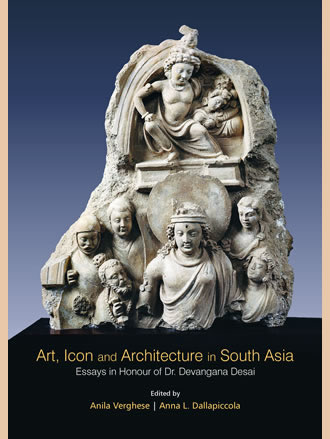 These two volumes of papers by a galaxy of scholars are a tribute to the eminent art historian Dr. Devangana Desai, who has made an invaluable contribution in the field of Indian art, iconology and architecture. The thirty-seven thematic essays in Art, Icon and Architecture in South Asia include many by senior and very illustrious scholars as well as some by younger researchers who are now making their mark. They are divided into five broad groups, in each the essays are arranged in a more or less chronological order. The first comprises four articles relating to Buddhist monuments and icons. The second group is the largest with seventeen essays that explore different aspects of iconography, images and narrative reliefs. The next is a set of nine papers on monuments, ranging from temples, to the transmission of architectural knowledge and even to water structures. The following group includes four papers that relate to painting, three of them touch on south Indian murals and one on miniature painting. The last group comprises three papers of a more general nature, dealing with the portrayal of women in Indian art, rasa, and the leap required to be made from iconography to iconology. The inclusion of the latter paper is significant given the seminal contribution that Dr. Devangana Desai has made to iconology through her book Religious Imagery of Khajuraho (1996). Bringing together as it does a large number of papers on a variety of themes related to Indian art, architecture and iconography, this book will be of much interest both to scholars as well as to students of art and aesthetics of South Asia. Contributors of Thematic Essays: ? Buddhist Monuments and Icons: M.K. Dhavalikar, Pratapaditya Pal, Elizabeth Rosen Stone, Suraj A. Pandit. ? Iconography, Narrative Sculpture and Images: Doris Meth Srinivasan, Devendra Handa, Amy G. Poster, Haripriya Rangarajan, Gouriswar Bhattacharya, Gerd J.R. Mevissen, Gauri Parimoo Krishnan, Tamara I. Sears, Parul Pandya Dhar, Preeta Nayar, Himanshu Prabha Ray, A.P. Jamkhedkar, Kumud Kanitkar, Madhu Khanna, S.R. Sarma, Crispin Branfoot, Shridhar Andhare. ? Monuments (Architecture): K.L. Mankodi, Michael W. Meister, Adam Hardy, Nachiket Chanchani, Arvind K. Singh, Amrendra K. Singh, Snehal Shah, Purnima Srikrishna, Jutta Jain-Neubauer. ? Painting: George Michell, B.N. Goswamy, Anna L. Dallapiccola, Anila Verghese. ? General Themes: Harsha V. Dehejia, Kamal Giri, Ratan Parimoo.


Dr. Anila Verghese is an historian who has been doing research work on Vijayanagara city and empire since 1985, with special focus on art and religion. She is the author of Religious Traditions at Vijayanagara: As Revealed through Its Monuments (1995), Archaeology, Art and Religion: New Perspectives on Vijayanagara (2000), Monumental Legacy: Hampi (2001), and co-author with Anna L. Dallapiccola of Sculpture at Vijayanagara: Iconography and Style (1998). She is also co-editor of South India under Vijayanagara: Art and Archaeology (2011) and Mumbai ? Socio-Cultural Perspectives: Contributions of Ethnic Groups and Communities (2013), and editor of Krishnadevaraya and His Times (2013). She has also published over fifty scholarly articles. She was formerly the Principal of Sophia College, Mumbai and currently is the Director of Sophia Shree B.K. Somani Memorial Polytechnic, Mumbai. Dr. Anna L. Dallapiccola has a Ph.D. in Indian Art History and a Habilitation (D.Litt.) from the University of Heidelberg (Germany) and is a Fellow of the Royal Asiatic Society of Great Britain and Ireland. She was Professor of Indian Art at the South Asia Institute of Heidelberg University from 1971 to 1995. In 1991 she was appointed Honorary Professor at Edinburgh University. She worked in India with the Vijayanagara Research Project from 1984 to 2001 and participated in the Cambridge Kumbakonam Project from 1995 to 1997. She has presented papers at a number of international conferences and written and edited many books. Dr. Dallapiccola?s most recent publications are South Indian Paintings: Catalogue of the British Museum Collection (London, 2010) and The Great Platform at Vijayanagara (New Delhi, 2010).