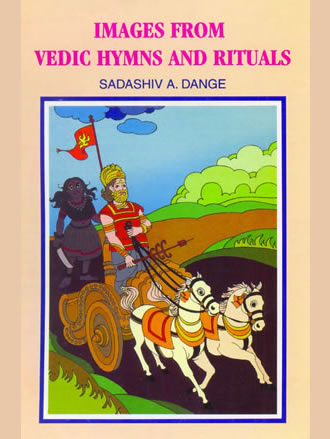 The book deals with variety of concepts, images and beliefs in the Vedic tradition, revealed through Vedic hymns and rituals. Several images and symbols, at times, are influenced by folk-beliefs at that period, some of which are current even to-day. The complex image of ?Aksara? not only having a rain-symbolism but also getting a dimension of proto-philosophy, that of the Son-husband current even today, that of the ?crying words? not restricted only to the Vedic literature, the images centering round Soma as a ritual-drink, the ?eye? of Prajapati, the problematic ?Sasarpari?, divinity of the banners , Vana though a war-trumpet changing into ritual musical instrument, the unique birth of Vasistha and Agastya from a jar, the words ?Dvibarhas? and ?siprin? indicative of power and status, the riddle of the black antelope, dance of Indra and Chaya giving a glimpse of ancient war-dance ? these and many more, delvings in the Vedic hymns and rituals display a treasure of myriad images.


Preface Introduction 1. Folk-beliefs and Rain-imagery of the Vedic Seers 2. The Thunder and the Aksara 3. Cosmic Foetus 4. The Vision of Vasukra 5. The Son-Husband 6. The Crying Worlds 7. The Advent of Soma 8. Symbolism in the Ritual of Soma 9. The Rituals of Soma and Kavya-rasa 10. The Eye of Prajapati 11. Tryambaka 12. Sasarpari: A War-spell 13. Aspects of War 14. Drum and the Dance of Indra and Chaya 15. The Vana 16. The Birth of Vasistha 17. Dvibarhas: A Wonder-working Priest 18. Siprin and Sipivista 19. Adma-sad 20. Sisna-deva and the Cult of the nude 21. Ajamits and Speech-coupling 22. Garta and Garta-aruk 23. Dirghatamas: His Vision of Jiva and Atman 24. Metempsychosis and the Rgveda 25. The Riddle of the Black Antelope 26. Kuntapa and Symbolism in Ritual Birth 27. Features of Tantrism and the Veda 28. Mother-Goddess on the Vedic Scene 29. The Goddess of Speech Pumscali 30. The Principle of Continuity in Vedic Ritual 31. Hotrvurya 32. Antarvedi-Bahirvedi 33. Havirdhana-mandapa and the Temple Illustartions Bibliography Index


Prof. Sadashiv Ambadas Dange is very well known in India and outside India for his contribution to the study of Indology, particularly Sanskrit, and is considered to be an authority on Vedic-Hindu myths, rituals and practices. He formulated and delivered a course of fifteen lectures on Hindu Myths at the International Institute of Semiotics and Structural Studies, arranged by the Central Institute of Languages, Mysore University (Dec. 1984 ? Jan. 1985) and five lectures on Indian Myths and Symbols, at the National Centre for Performing Arts, Bombay (1998) His numerous books include ? Pastoral Symbolism from the Rgveda (University of Poona, 1970), Vedic Concept of ?Field? and the Divine Fructification, (University of Bombay, 1971), Sexual Symbolism from the Vedic Ritual (Ajanta Publications, Delhi, 1979), Divine Hymns and Ancient Thought, 2 vols., (Navrang, New Delhi, 1992, 1995), Encyclopaedia of Puranic Beliefs and Practices, Vols. I-V, (Navrang, New Delhi, 1986-90) and Towards Understanding Hindu Myths (Aryan Books International, New Delhi, 1996). Prof. Dange was R.G. Bhandarkar Professor and Head, Dept. of Sanskrit, University of Bombay (Mumbai) and twice President of the Vedic Section at the All India Oriental Conference (1980 and 1985). He was Consultant Editor for the Encyclopaedia of Human Ideas on Ultimate Reality and Meanings and Editor for the Indian Section of its Journal, Ultimate Reality and Meaning, Regis College, Toronto (Canada) for more than a decade. The honours conferred on him include ? Silver Medal from the Asiatic Society of Bombay (1983), Felicitation by the State Govt. of Maharashtra (1990), ?Special Honour? by the Uttar Pradesh Sanskrit Academy (1989) and the Certificate of Honour from the President of India (1992), to mention a few.