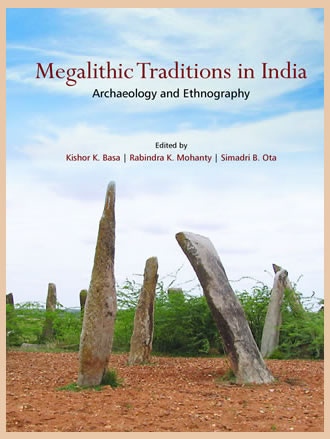 Erecting burial monuments in Indian subcontinent can be dated to prehistoric times and was well known during protohistoric period. However, building of Early Iron Age megalithic burials as a tradition can be dated back to mid-second millennium bc and continued till ad 500-600 in some parts of India. Though a lot of work has gone into the study of these monuments since Babington first reported megaliths in India in 1823, much research is still required to study these relics from various emerging perspectives. In order to explore, understand and comprehend this living tradition, the Indira Gandhi Rashtriya Manav Sangrahalaya (IGRMS), Bhopal, in 2005, convened a national conference. The present set of two volumes consists of select papers presented in this conference along with others that were specially invited from eminent scholars in the field. The present work is relevant to students of archaeology, anthropology, ancient history and South Asian studies for a number of reasons. First, at an empirical level, the work on megalithic culture covers all the regions of India?east, west, north, south and especially northeast. Second, while there are quite a few papers on archaeology, the present work also contains ethnographic studies on various ethnic communities still practising megalithic traditions. Such ethnographic studies have two implications. While, in general, they become a source for providing insight into the possible interpretive ideas, more for non-existent archaeological records, they also suggest that megaliths are not merely related to the burial practices, but are also related, in many cases, to the various functions related to their associated cultural behaviour in an ecological niche. This has implication for broadening the perspectives on megalithic studies in India. Third, archaeological investigation is basically multidisciplinary. The present volume reinforces this argument by including papers on archaeobotany, zooarchaeology, archaeometallurgy, palaeodemography and palaeopathology, etc. Fourth, from the theoretical point of view, the work is characterised by its eclectic approaches. These range from antiquarian to cognitive-processual to study on landscape. Besides, aspects of social archaeology are highlighted including that of craft specialization. Fifth, the volume also includes a paper on museum and megaliths showing the open air display of megaliths from archaeological and ethnographic contexts at IGRMS, Bhopal. Last but not the least, with regard to the structure of the volumes, they have been divided into six sections in order to make them comprehensive as well as panoramic.


Kishor K. Basa has been teaching archaeological anthropology in the Department of Anthropology, Utkal University, Bhubaneswar since 1980. A Ph.D. from University of London and a Commonwealth Academic Staff Fellow, University of Cambridge, Professor Basa was Director, IGRMS, Bhopal; Indian Museum, Kolkata and Anthropological Survey of India. He was President, Archaeology Section of Indian History Congress as well as Anthropological and Behavioural Science Section of Indian Science Congress. He has excavated the sites of Malikhoja (Sankerjung), Harirajpur and Gourangapatana?all in Odisha. Rabindra K. Mohanty has recently retired as Professor and Head, Department of Archaeology, Deccan College, Pune. The most important excavations he has directed and co-directed include Balathal, Bhagimohari, Mahurjhari and many other related megalithic sites in the Deccan. His major contribution lies in the long-term investigation into the megalithic culture of Vidarbha that has revolutionised the present understanding of megalithic tradition of the region. For more than a decade, he has been excavating protohistoric and early historic sites of Odisha, such as Golbai Sasan, Sisupalgarh, Lathi, Talapada, Manikapatana, Harirajpur and Gourangapatana. His research findings have been extensively published in national and international journals. He has also been working in collaborative research projects with University College London, Oxford University and University of California, Los Angeles in various parts of India. Simadri B. Ota is Director, Archaeological Survey of India. He was Director-in-Charge of IGRMS, Bhopal during 2003-04 and 2013-14. A recipient of the Japan Foundation Fellowship, he has excavated a number of prehistoric, chalcolithic and historical sites in Madhya Pradesh, West Bengal and Ladakh. Some such sites include Bhimbetka, Pipri, Utawad, Newalkheri, Rajpat (Cooch Bihar) and Kiari. At present, he is involved in the geo-archaeological investigation in the area of T