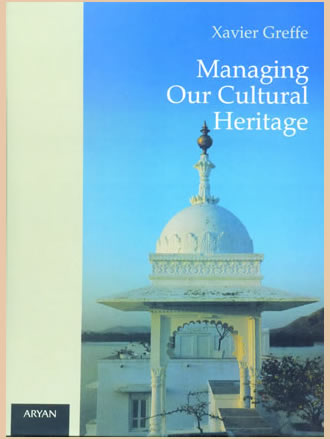 Cultural heritage is the sum-total of historical sites, neighbourhoods, art collections and practices that a society inherits from its past and tries to preserve for future generations. In principle, nothing is as far removed from our production ?and-trade-based economy as this body of unchanging assets that defy duplication. However, the development of cultural tourism, the importance of artistic pursuits and the vitality of art markets, testify to the economic value of this heritage. By generating resources, both directly and indirectly, it provides gainful employment to a large number of people. There is nothing wrong in emphasising the economic dimension provided we respect two conditions. The first is to look upon our cultural heritage as a source of several heritage-related services. The second is not to choose between various cultural options for economic reasons. On the basis of these principles, this book will try to elucidate the economic dimensions and potential of our cultural heritage, the management methods used by those who hold ownership rights or the right of use of cultural properties and define the future grounds for state intervention. The first three chapters deal with these economic dimensions and the chain of jobs and resources that they generate. After establishing the importance of cultural heritage in the present economic system and the conventions that demarcate its outlines, this book will describe the services it renders to households and enterprises, to regions and societies, in order to determine its economic value. The next three chapters deal with the management of heritage-related resources. Is it possible to talk of effectiveness and efficiency and if so, what are the proper instruments to achieve them? Is there a system for marketing cultural heritage? How does one price the acquisition of heritage-related services? The last chapter shows why markets do not permit an optimal allocation of funds and a suitable level of activities, especially in urban areas. Does it follow that our heritage policies should be shaped by the shortcomings of the market or should they be changed by demonstrating the advantages of a heritage ecosystem?


Xavier Greffe is Professor of economics at the University of Paris I Pantheon-Sorbonne. In charge of the PhD Program on the Economics of Arts and Heritage, he has written various books in the field of cultural economics and public management. He has been administrator both at the central and regional level, in charge of French training programs for heritage and crafts management. He is adviser for the European Union related to cultural employment. SAMBHAVA: Preservation of the cultural heritage of Ahmedabad Preservation of the historic heritage of cities, which is a priority as far as town planning in France is concerned, is now beginning to be taken into consideration in India as well. This is evinced by the increasing concern shown towards town planning by government institutions as well as private individuals. Keeping this in mind, the Embassy of France in India decided in 1998 to organise a series of seminars, entitled SAMBHAVA, to plan a strategy for the preservation of the historic heritage of Ahmedabad. The concentration of experts and architects and the unique heritage of the ancient city, well illustrated by its 'pols', led to Ahmedabad being chosen as the testing ground for this experiment. The Municipality of Ahmedabad, INTACH, HUDCO, the Indian Institute of Management and the National Institute of Design were obvious partners. The objectives of the three SAMBHAVA seminars held in Ahmedabad were multiple: the legal context of the action, the relevance of the choice of historical areas and constructions, observance of rules on preservation, preservation per se, training of curators, methodology and more generally heritage economy. A test site, initiated in January 2000, the first phase of which was completed just prior to the earthquake of January 2001, will serve as a model for future restoration. Changes in existing legislation, which would enable monitoring the granting of construction permits and authorisations to demolish, are also under st