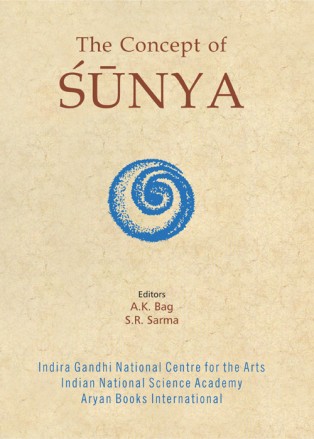 The concept of sunya in India has a long history and varied manifestations in different dimensions, in mathematics, in philosophy and in mysticism. In mathematical literature it is used in the sense of 'zero' having no substantial numeral value of its own but playing the key role in the system of decimal notation, to express all numbers with nine digits, one to nine and the sunya as the tenth. The application of sunya in this system of notation was discovered in India some time in the pre-Christian era. Its concretization in the form of a dot or a small circle and its use in decimal place value system was first transmitted to the Middle-East and thence to Europe to supplant the Greek and Roman systems, and the whole world slowly recognized it as the most scientific system of numeration. The present volume is the outcome of a joint seminar organized by Indian National Science Academy and Indira Gandhi National Centre for the Arts and aims at a documented account of various facets of sunya in mathematics and astronomy and its various ramifications in philosophy and arts. About the Logo Zero is the embodiment of purna (full), lopa (absence), akasa (universe), bindu (dot), sunya (circle), in Indian literary and cultural traditions. The logo has been formulated keeping all these points in mind by the artist, Shri P.T. Deshpande of the Indira Gandhi National Centre for the Arts, New Delhi.


Introduction, The Contributors, Sunya in Speculative Thought 1. Sunyata: Its Meaning in Philosophy and Science - Swami Jitatmananda 2. Technology of Using Sunya in India - R.C. Gupta 3. Vedic Numerical System including Sunya - S.A.S. Sarma 4. Word and Alphabetic Numerical Systems in India - K.V. Sarma 5. Brahmi Numerals and Decimal Notation: Nature and Evolution - Ajay Mitra Shastri 6. Kharoshti Numerals and the Early Use of Decimal Notation in Indian Epigraphs - B.N. Mukherjee 7. Reflections on Paninian Zero - M.D. Pandit 8. Sunya in Pingala's Chandahsutra - Sreeramula Rajeswara Sarma Sunya in Mathematical System 9. Zero and the Symbol for Zero in Early Sexagesimal and Decimal Place-Value Systems - David Pingree 10. Chinese "Ling" (0) and Indian "Sunga" (0) Spread to China - Wang Yusheng 11. Zero in the Mathematical System of India - R.C. Gupta 12. Need for Zero in the Numerical System in India - A.K. Bag 13. The Mathematical Epistemology of Sunya - C.K. Raju 14. The Importance of the Concept of Zero in Modern Mathematics and Science - J.N. Kapur 15. The Concept of Sunya and Its Ramifications in Mathematics and Computer Science - M.R Adhikari 16. Impact of Indian Philosophy on Bhaskariya Concept of Zero - A. Mukhopadhyaya 17. Philosophical and Mathematical Implications of Zero in Indian Culture - S.A. Paramahans Ramification of Sunya in Other Fields 18. The Concept of Sunya in Tantra and Agama - H.N. Chakravarty 19. Concept of Sunya in Sakta Tantras - M.C. Joshi 20. Sunya in the Context of Temple Art - Devangana Desai 21. Sunya in the Indian Tala System - Prem Lata Sharma 22. Number Mysticism in Other Regions and the Impact of Sunya - P. Manansala 23. NOW-Dimensionless (No-Mind-Sunya) State - S.C Malik 24. Sunya: A Holistic Veiw - R. Sathyanarayana


Dr. A.K. Bag (b.1937) an M.Sc. in Pure Mathematics and Ph.D. in History of Mathematics, both from the University of Calcutta, served for seven years (1971-77) as lecturer of mathematics in the Surendranath College, Kolkata, and twenty-three years (1977-2000) as Co-ordinator and Head of History of Science Programme in the Indian National Science Academy, New Delhi. He is the author / editor of a large numer of books and research articles. Some of his books are: Bibliography of Sanskrit Works in Astronomy and Mathematics (with S.N. Sen and S.R. Sarma), Mathematics in Ancient and Medieval India, Science and Civilisation in India (Harappan Period), Sulbasutras (ed. & tr. with S.N. Sen), History of Oriental Astronomy (ed. with G. Swarup and K.S. Shukla), Indian and Central Asian Science and Technology (two volumes ed.), History of Technology in India (Vol. I, ed.). Elected Member of the International Academy of History of Science, Paris. He is presently the Editor, Indian Journal of History of Science and Adviser to the History of Science Programme of the Academy. Dr. S.R. Sarma (b. 1937) studied at Sir C.R. Reddy College, Eluru; Visva Bharati, Santiniketan; and Philipps University, Marburg, Germany. Joined the faculty of Aligarh Muslim University in 1969 and retired from there as Professor and Chairman of the Department of Sanskrit in 1997.
Fellow of the German Academic Exchange Service, twice at the Philipps University, Marburg, (1962-66; 1972) and once at Johann Wolfgang Goethe University, Frankfurt, (1995-96); Visiting Associate Professor of History of Mathematics at Brown University, Providence (1992-93); and Visiting Professor at the Universite de Paris III (1994). His publications include critical editions with translation of Thakkura Pheru's Rayanaparikkha on gemmology, and Yantraprakara of Sawai Jai Singh on astronomical instruments. Presently engaged in preparing A Descriptive Catalogue of Indian Astronomical and Time-Measurin

write a review (THE CONCEPT OF SUNYA) Please Login!