Home / Philosophy / COMMUNICATION WITH GOD: The Daily Puja Ceremony in the Jagannath Temple 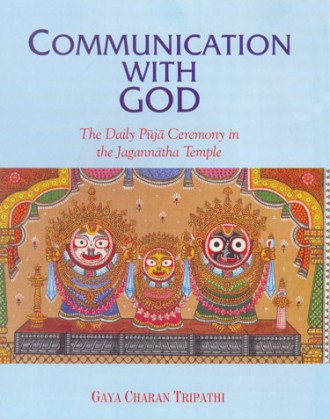 The work for the first time presents in a very detailed manner the various rites forming the daily Puja ceremony of one of the most famous and important temples of the Hindus, namely that of Jagannatha at Puri. The Study is based on a large number of authentic palm-leaf manuscripts discovered and collected by the author in Orissa, substantiated by his personal observation and information acquired from the temple functionaries. It is a well known fact that the study of Hindu temples rituals has not yet been taken up so extensively and seriously as that of the Vedic rituals. This work seeks to fill up this desirable gap and is a significant contribution to the study of the process of formation of the medieval Hinduism and its gradual development. The rite of the Hindu Puja is basically a very subtle and sublime spiritual phenomenon in which the worshipper, in the course of meditation, first dissolves his mundane body to create a divine body for himself, identical in nature with that of his Deity. Thereafter visualising the tejas of the Deity in his heart through concentrated meditation upon His/Her form, he transfers this divine effulgence into the image for the time being in order to achieve a subject-object relationship with the Deity, who is identical with the self, and starts communicating with his God from the same elevated plane. An analysis of the Puja ritual of a deity not only sheds light on the primeval concept and the character of that deity, but also reflects changes, which he or she has undergone from time to time. The study, consequently, brings to light the various streams of religious practices and philosophical thoughts which have gone into making of the phenomenon which is now commonly known as the ?cult of jagannatha? representing the Orissan form of theistic Visnuism.