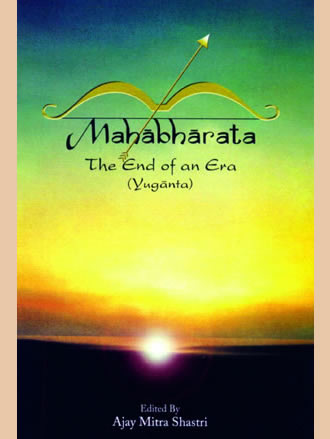 The Mahabharta War was, or thought to be, such a momentous event as to leave an indelible impact on the life and culture of not only the Indian subcontinent but on all the other countries where Indians migrated in strength and lived for some time. There were several important personages in India and abroad named after the Mahabharata characters and places in far-flung areas are found christened after them. The Mahabharata is still being lived by Indians and by those imbibing Indian culture elsewhere. One cannot think of Indian religion, philosophy, thought-pattern and literary genres without the Mahabharata. The present anthology of twenty-six well-researched papers representing the outcome of a national seminar hosted by the Indian Institute of Advanced Study, Shimla, sheds welcome light and presents fresh perspective on absorbing questions relating to the Great Epic like the date of the war, peoples, ethnography, culture, polity, communication, epigraphic allusions, etc. It also studies numerous versions prepared by the votaries of different sects to suit their own needs and in different Indian languages. They either contain fresh information or stress the need to have a second look at the known data. By their very nature, these contributions are bound to stir the imagination of and excite one and all interested in epic studies and early Indian history and culture.


(Late) Prof. Ajay Mitra Shastri retired as Professor and Head of Dept. of Ancient Indian History, Culture and Archaeology from Nagpur University in 1994 after a distinguished academic career of about thirty-seven years. Prof. Shastri has been associated with several universities and professional organizations in various capacities. He has been Convenor of the Inscriptions program of the Indian Council of Historical Research (ICHR), Chairman of the Advisory Board (Ancient Period) of the National Commission of History of Science of Indian National Science Academy, Member of History Panel of the University Grants Commission (UGC), National Lecturer in History and National and Emeritus Fellow of UGC, Senior Fellow of ICHR, Sectional President of conferences of Indian History Congress, All-India Oriental Conference, Andhra Pradesh History Congress, Maharashtra Itihas Parishad , General President of Conferences of Numismatic Society of India, Epigraphical Society of India, Indian History and Cultural Society, etc. He has delivered several prestigious lecture series and received several coveted honours and awards including the Fellowship of the Royal Numismatic Society, Akbar Silver and Altekar Gold Medals of Numismatic Society of Indian, James Campbell Memorial Gold Medal of Asiatic Society of Bombay, Plaque of Honour of Coin Study Circle (Calcutta). copperplate of honour of Epigraphical Society of India, Jijamata Puraskar of Chhatrapati Pratishthan, Nagpur, etc. He has authored/edited 24 works, contributed about 450 research papers, reviews and forewords and chapters to several prestigious learned series. Two festschrifts have been brought out for him, Professor Ajay Mitra Shastri Felicitation Volume edited by Dr. S.K. Bhatt from Indore (1988) and Ajay-sri (in two parts) edited by Shri Devendra Handa from Delhi (1989). Prof. Shastri left for his heavenly abode on 11the January, 2002.