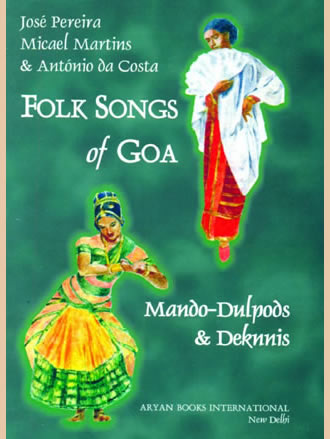 Konkani Song, of which Goan Song is the preeminent branch, is a treasury of the traditional music of the Indian subcontinent. It has at least 35 types, monophonic and harmonic, the former prevalent before the Portuguese brought Western music into India, and the latter, consequent to the Western impact. It was in Goa that Indian musicians first began to compose in Western musical forms, incorporating into them motifs and nuances of their own immemorial tradition. Among these 35 types four were created to accompany social dancing; the Mando, the Mando-dulpod, the Dulpod, and the Deknni. The Mando, the finest creation of Goan Song, is a slow verse-and-refrain composition, in six-four time, dealing with love, tragedy and contemporary events, both social and political. Aryan Books International has published two volumes on the Mando, entitled, Song of Goa, Vol. 1: Mandos of Yearning (2000); and Vol. 2: Mandos of Union and Lamentation (2003). While the Mando is an art song, the remaining three types represent Goan folk song. The Mando-dulpod is a slower variety of the Dulpod (or a quicker sort of Mando), also in six-four-time, facilitating the transition from the slow rhythm the Mando to the quicker one of the Dulpod. The Dulpod itself, in six-eight time, is typically descriptive of everyday life in traditional Goa, particularly that of the Christians. The Deknni (?song of the Deccan??) is a song imitating Hindu music in the musical idiom current among the Christians, in two-four or six-eight time, descriptive mostly of Hindu life, with special attention given to the temple dancers. The present volume contains examples of the Mando-dulpod and the Deknni. Hopefully a future volume will be devoted to the Dulpod.


Jose Pereira (1931) is Professor of Theology at Fordham University, New York, where he lectured on History of Religions. He has taught and done research in various academic institutions in Lisbon, London and Varanasi, and has published 20 books and over 140 articles on theology, history of art and architecture, and on Goan and Konkani culture, language, literature and music. Micael Martins (1914-1999), of Ol-lli/Orlim, Goa, studied music in Goa, and in Bombay with renowned music teachers. He performed for various societies in Bombay and Delhi, an led orchestras of films in Bombay. He began collecting traditional Goan Songs, art and folk, in 1993, and collaborated with Jose Pereira in recording Konkani songs from 1954, putting together as many as 11,000 numbers. Martins incorporated several motifs from traditional Goan Song into his classical musical compositions. Antonio Da Costa (1943), a priest, psychotherapist and musician, is currently working in the field of gerontology and ministers to the elderly in Arizona, U.S.A. As a musician he was trained in the Saligao and Rachol Seminaries, the London Trinity School of Music (in Bombay), the Juillard School of Music and Columbia University, New York. Inspired by his mother Arsentina, he began collecting specimens of traditional Goan Song from the age of 16, and for several years broadcast mandos, dulpods, deknnis, fugrhis, hymns and motets over Radio Goa, with the assistance of the choral groups he had founded and directed. He also organized concerts of Goan Music in Bombay, Pune and Mangalore to expose Goan audiences to the treasure of their traditional music.