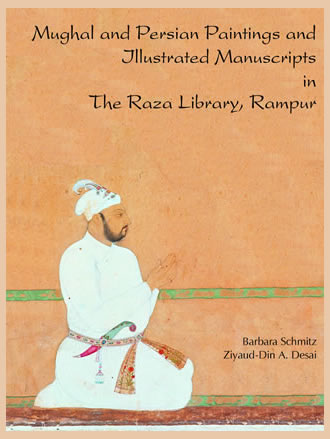 During the 19th century and the first half of the 20th century, the Nawwabs of Rampur, the hereditary rulers of Rohilkhand, a district some 75 kilometers east of New Delhi, amassed a large collection of books and art, including illustrated books and album paintings. Their collection was given to the people of India after independence. The Raza Library at Rampur thus possesses a remarkable collection of Mughal and Persian Paintings and illlustrated books. This includes minia-tures from the great Jahangirnama, considered by many as the greatest of all Mughal illustrated manuscripts. The Raza Library holdings of the Akbar period are equally distinguished including a work on astrology Tarjama-i Sirr al-maktum and a Divan-i Hafiz with eleven miniatures by Akbar?s best court artists painted in Lahore about 1585, published here with much new scholarship. A painting of the aging Jahangir at the jharokha and many other portraits of the 17th-19th centuries will come as wonderful surprises to those interested in Indian art throughout the world. Most of the miniatures (some 4,000 in number) and the contents of thirty-five albums of paintings (an additional 1,000 items) are catalogued herein. Many of these are being reproduced for the first time. The catalogue entries include up-to-date scholarly research on Mughal and Persian painting. An extensive bibliography and numerous indices make this volume a helpful tool for scholars. The catalogue?s 330 illustrations will delight every reader.

Dr. Barbara Schmitz, received her Ph.D. in the field of Islamic painting from the Institute of Fine Arts, New York University in 1981. Prior to this catalogue, Dr. Schmitz has authored Islamic Manuscripts in The New York Public Library (New York and Oxford, 1992) and Islamic and Indian Manuscripts and Paintings in The Pierpont Morgan Library (New York, 1997). More recently she edited and contributed to a book for Marg Publications, After the Great Mughals: Paintings in Delhi and the Regional Courts in the 18th and 19th Centuries (Bombay, 2002) and contri-buted two essays, ?Persian Influences on Indian Painting? and ?Indian Influences on Persian Painting?, to the Encyclopa-edia Iranica (Volume XIII, fasc. 1, New York, 2004, pp. 65-81); these articles also appear in a book on India?s relations with Iran published by The Encyclopa-edia Iranica Foundation, New York. She is currently working on a book on Persian painting in Khurasan, from 1560 to 1630. Dr. Ziyaud-Din A. Desai (1925-2002) had an exceptionally brilliant career. He topped the list of successful candidates at the B.A. and M.A. examinations of the Bombay University. After teaching Persian at the university level for about six years, he joined the Archaeological Survey of India as the head of its Perso-Arabic epigraphy section in 1953 and finally retired as Director (Epigraphy) after a distinguished career of three decades. Dr. Desai is the author of about two dozen books and more than 350 articles on Indo-Muslim history, art, architecture and numismatics, Indo-Persian literature, old Urdu (Gujari language), etc.