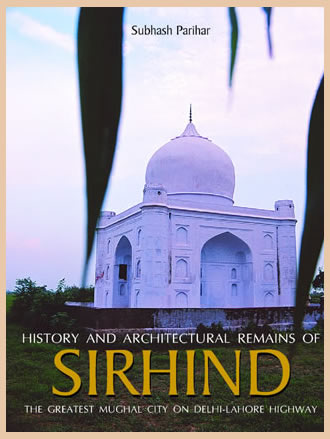 Sirhind, during the Mughal period, was the largest city situated in the midst of the Lahore-Delhi Highway. Even before that the antiquity of the city is traceable to the beginning of the Christian era. But it reached the zenith of its glory during the seventeenth century when it became one of the most prosperous cities of the Mughal empire. Its splendour is often described by the chroniclers and travellers of the period. With economic prosperity it also developed into a centre of cultural activity. Dozens of saints, scholars, poets, historians, calligraphers and scribes from the city earned fame all over the Mughal empire. Great building activity is reflected in the popular belief that in its heyday, the city had 360 mosques, gardens, tombs, caravansarais and wells. After the first decade of the eighteenth century, the city fell on evil days. Taking advantage of the waning Mughal authority, it was plundered repeatedly by the bands of Sikhs, Marhattas and Afghans. And in 1764, in the final attack of the Sikhs, it was devastated thoroughly. The work is divided into two parts. The first part comprises three chapters. The first chapter provides a general history of the town recording the known historical events in a chronological order. The next chapter is a bio-bibliographical survey of the saints (Shaikh Ahmad Sirhindi and others) and ?ulema of the town. The scholars of other fields, poets, calligraphers etc. form the subject matter of the third chapter. Despite the utter destruction of Sirhind during the eighteenth century, more than three dozens of historical monuments are still extant there. The second part of the book deals with these monuments. The first chapter of this part presents an analysis of the main architectural features common to all types of monuments. The next three chapters provide a detailed survey of the extant monuments classified on typological basis, i.e., tombs (including Rauza Sharif), mosques, gardens and other secular buildings. This part is based on first hand field work done by the author. The work is illustrated with 21 colour photographs, 120 b/w photographs along with 49 maps, ground plans, section drawings and isometric views.


Subhash Parihar was born on 12 August 1953 at Kot Kapura, East Punjab where he still lives. He is M.A. (History of Art), M.A. (History), M. Phil., Ph.D. As an art historian, he has done pioneering work on the Indo-Islamic architecture of the North-Western India. He is author of Mughal Monuments in the Punjab and Haryana (Delhi, 1985) (Honoured with Dr. W.G. Archer Award by the Punjab Lalit Kala Akademi); Muslim Inscriptions in the Punjab, Haryana and Himachal Pradesh (Delhi, 1985); Some Aspects of Indo-Islamic Architecture (Delhi, 1999) and more than three dozens of research papers published in international journals like Oriental Art (London); Journal of Royal Asiatic Society (London); Iran (London); East & West (Rome); Muqarnas (Leiden); Journal of Pakistan Historical Society (Karachi); Islamic Studies (Islamabad); Marg (Mumbai) etc. He was awarded Homi Bhabha Fellowship (1994-96). He undertook a Photographic Survey of Architectural Heritage of Haryana under Senior Fellowship from the Ministry of Culture, Government of India (2001-03). Also contributed to The Dictionary of Art (34 vols.) published by Macmillan (London) and Encyclopaedia of Persian Language, Literature and Culture in the Sub-Continent (to be published in Iran). His latest work?Land Transport in Mughal India: Agra-Lahore Mughal Highway and its Architectural Remains?partially financed by The Barakat Trust (London) is under consideration for publication in the United Kingdom. Dr. Parihar is active in the fields of painting, sculpture and photography also. As an artist he has been actively participating in art exhibitions since 1977. He has had two one-man shows of his works in Government Museum & Art Gallery, Chandigarh (1979) and Triveni Gallery, New Delhi (1982). He was awarded by Punjab Lalit Kala Akademi in 1979 for the best collage. He has also participated in Artists? Camps in 1979 and 1980 (organized by Punjab Lalit Kala Akademi, Chandigarh), and in 1997 (organized by Punjab Art Heritage, Ja