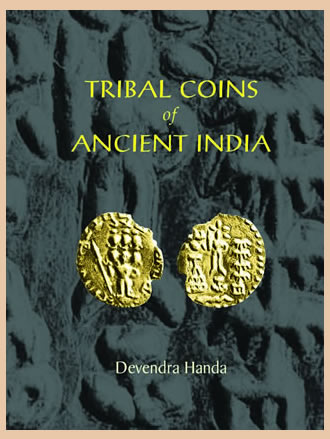 Tribal coins throw a flood of light on the history, culture, religion, economy, polity, trade, commerce, technology, symbology, metrology, movements, etc. of the various tribes in ancient India. They thus enlighten us about various aspects of the life and culture of the people in ancient India. Numismatic discoveries made from time to time, interpretations and newer techniques of analysis have rendered earlier views in many cases as obsolete and worth revision. Some new types of Agreya coins published recently throw fresh light on the religious proclivities of the Agras. Coins discovered from Nohar show the presence of the Arjunayana tribe in northeastern Rajasthan. A critical analysis of the typology and provenance of Audumbara coins reveals that the monarchical issues of the Mitra rulers do not actually belong to the tribe, and that there was no ruler of the name of Mahadeva belonging to the Audumbara stock, thus rendering the old classification of their coins as outdated. The discovery of the hoards at Chakkar near Mandi and at Hat Koti and Jalog in Shimla district in Himachal Pradesh, stray finds of new types of Kuninda coins, their coin molds from regular excavations at Sanghol in Punjab and their coins from the site of the Syena-chiti (Eagle-shaped fire-altar) at Purola in Uttaranchal have thrown fresh light on their history, culture, religion, kingship, capital, mint-site and techniques of minting, trade and commerce, etc. The diminutive nature of Malava coins as evidence of poor economy stands challenged in the light of epigraphic evidence. The existence of the Kshudrakas and Savitriputras has been proved on the basis of their coins. The Vemakis were known only from Rudravarman?s silver and a dubious copper coin but the author has brought two of their new rulers ? Bhavavarman and Sivaghosha ? to light. The settlement of the Vrishnis at Sunet near Ludhiana is proved by a number of their seals, sealings and copper coins. Many fallacies about the Yaudheyas have also been corrected by a fresh study and analysis of their coins. This book, based on a study of various published and unpublished hoards and stray finds of coins in institutional and private collections is the first Indian publication on the tribal coins containing the largest number of illustrations bringing to light many new coins and offering new interpretations.