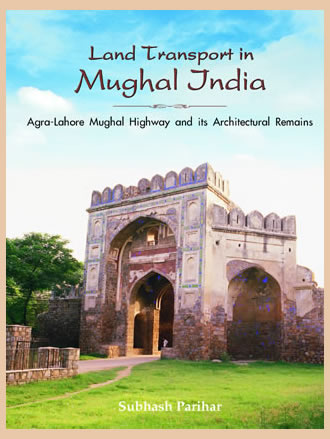 The seventeenth century Europeans, who traversed the Agra-Lahore Mughal Highway, showered high praise on it. The British traveller Thomas Coryat (1612-17) considered it an incomparable show of that kind ever surveyed by his eyes. Thomas Roe (1614-18), Ambassador of James I, the King of England to the Mughal Court, praised it as ?one of the great works and wonders of the world?. This high acclaim of the route prompted Subhash Parihar to study the route, travelling it stage by stage, in their footsteps. He thoroughly studied the rich architectural remains of the Highway in the forms of caravansarais, bridges, kos-minars, baolis and tanks. A survey report of these remains forms the kernel of the book. No other factor is more determining in deciding the routes in a region than its geography. Hence the physical geography of the Indian sub-continent, particularly the northern India, as well as its historical outline forms the subject of the first chapter. The second chapter describes the means of transport and communication used in India during the medieval times. The third chapter traces three major medieval routes in the Mughal Empire ? Agra to Surat, Agra to Patna and Dacca, and Agra to Kabul ? mainly on the basis of medieval travel accounts. The development of routes to the west of the river Yamuna and the evolution of the Agra-Lahore Highway form the subject matter of the fourth chapter. The fifth chapter presents the historical background and an analysis of the architectural character of types of the building for travellers, namely, caravansarais, bridges, baolis, tanks and kos-minars. The last, the most important, chapter comprises a report of the field survey of the architectural remains of the Agra-Lahore Mughal Highway. The book concludes with two appendices, a glossary, and a bibliography. The study, besides being the actual field survey, also makes use of the primary sources like ancient texts, medieval chronicles, travel accounts, Archaeological Survey of India Reports, District and State Gazetteers, as well as numerous secondary sources. The study is illustrated with 6 maps, 68 drawings, 16 colour plates and 143 monochrome plates, all prepared by the author himself.


Subhash Parihar was born on 12 August 1953 at Kot Kapura, East Punjab, where he still lives. He is M.A. (History of Art), M.A. (History), M. Phil., Ph.D. As an art historian he has done pioneer work on the Indo-Islamic architecture of the North-Western India. He is author of Mughal Monuments in the Punjab and Haryana (Delhi, 1985) (Honoured with Dr. W.G. Archer Award by the Punjab Lalit Kala Akademi); Muslim Inscriptions in the Punjab, Haryana and Himachal Pradesh (Delhi, 1985); Some Aspects of Indo-Islamic Architecture (Delhi, 1999); History and Architectural Remains of Sirhind (Delhi, 2006) and more than three dozens of research papers published in international journals like Oriental Art (London); Journal of Royal Asiatic Society (London); Iran (London); East & West (Rome); Muqarnas (Leiden); Journal of Pakistan Historical Society (Karachi); Islamic Studies (Islamabad); Marg (Mumbai), etc. Also contributed to The Dictionary of Art (34 vols.) published by Macmillan (London) and Encyclopaedia of Persian Language, Literature and Culture in the Sub-Continent (to be published in Iran). He was awarded Homi Bhabha Fellowship (1994-96). He undertook a Photographic Survey of Architectural Heritage of Haryana under Senior Fellowship from the Ministry of Culture, Government of India (2001-03). The present work ? Land Transport in Mughal India: Agra-Lahore Mughal Highway and its Architectural Remains ? was partially financed by The Barakat Trust (London). Dr. Parihar is active in the fields of painting, sculpture and photography also. As an artist he has been actively participating in art exhibitions since 1977. He has given two one-man shows of his works in Government Museum & Art Gallery, Chandigarh (1979) and Triveni Gallery, New Delhi (1982). He was awarded by Punjab Lalit Kala Akademi in 1979 for the best collage. He has also participated in Artists? Camps in 1979 and 1980 (organized by Punjab Lalit Kala Akademi, Chandigarh), and in 1997 (organized by Punjab Art Herit