Home / Art / / INDIAN MINIATURES: The Library of A. Chester Beatty 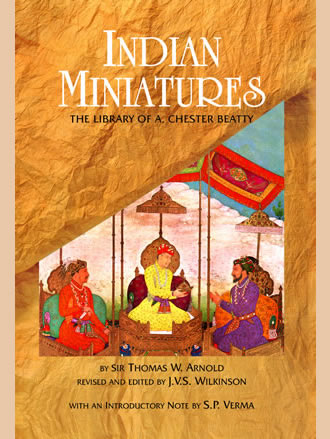 This volume is devoted to the large collection of Indian miniatures executed over a period of three centuries from about ad 1550 until ad 1800. All these paintings were acquired by one of the great collectors of the world Sir Alfred Chester Beatty (1875-1968) and at present, are lodged in the Chester Beatty Library, Dublin. Chester Beatty?s collection is superb and provides representative and thorough documentation of the period. It provides basic information about the Indian art during 16th-18th centuries. The Library possesses eighteen illustrated manuscripts including the most prestigious Akbarnama, a chronicle of Akbar the Great, besides the Royal Albums containing allegorical, apotheosis and dynastic portraits of the Mughal emperors and genre scenes portraying ordinary life. Each miniature is arranged (as far as possible) in chronological order and the theme of each miniature is given in brief with authors? (T.W. Arnold and J.V.S. Wilkinson) comments on style and technique. Further, the rendering of the inscriptions found on the miniatures giving the artists? name together with other related information designate the volume as a reference work. Illustrated with 103 paintings it encompasses all the major facets of the 16-18th centuries Indian art. Truly, the Catalogue is a timeless endowment of Chester Beatty for all of us. The Catalogue, first published in 1936 is now rare and a reprint of the same in agreement with its excellence fulfils the most cherished mission of the great Collector who was always anxious to make his material available to scholars by means of beautifully published comprehensive and descriptive catalogues, art-exhibitions, and generously extending all facilities to the researchers, scholars and students at the Library. The Catalogue, initially published in a set of three separate volumes, now bound in one volume is handy. It will be widely read by the students and specialists of art history and South Asian studies. An ?Introduction? to the volume by Professor S.P. Verma will be a fit guide to the charming field of Indian art.

S.P. Verma (b. 1942), formerly Professor of History at Aligarh Muslim University, is the author of Art and Material Culture in the Paintings of Akbar?s Court (New Delhi, 1978); Mughal Painters and Their Work, a Biographical Survey and Comprehensive Catalogue (New Delhi, 1994); Mughal Painter of Flora and Fauna, Ustad Mansur (New Delhi, 1999); Painting the Mughal Experience (New Delhi, 2005), and numerous articles in academic journals. Also, he is a practising artist and the recipient of awards by the Indian Academy of Fine Arts, Amritsar (1981) and the Academy of Fine Arts, Kolkata (1982). In 1986-87, he was a Fulbright Fellow at the Freer Gallery of Art, Smithsonian Institution, Washington, D.C., and a Senior Fellow (2004-06) at Indian Council of Historical Research, New Delhi.