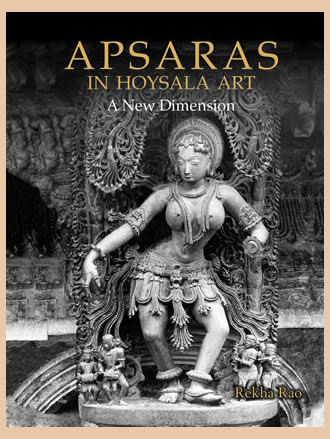 This book on Apsaras in Hoysala art with particular reference to the Belur Chennakesava temple is dealt in two parts, viewing apsara as a dancer and a philosopher. Part one is about the dance of apsara, while part two is about the psychological states of awareness levels that are depicted. It is like exploring the external and the internal world of apsaras. Part I deals with the apsara?s skills in dance and dramaturgy, precisely a study of the depiction of Rasas ? the sentiments in sculptures, that are viewed through the medium of Na?yasastra and Dasarupaka ? a treatise on Indian dance, music and dramaturgy. Part I is a study of the superficial aspects like the theme, the posture, the accessories used, the actions of the attendants and so on. Apsaras are viewed as dancers, who deserve to be elevated to the status of permanent guides for the aspect of rasas. Part II is not complementary to Part I, but comes out with a different approach of seeing apsara from a philosophical perspective. The author has tried to view the logic behind the actions of apsaras and analyse the reasons philosophically. At this juncture, her actions are taken for the behavioural pattern, in reality (and not viewed as a dancer?s). The actions are related to her thought process, the Gunas, (like Rajoguna or Sattvikguna), the psychological state of the soul or the ?Avasthas?, and the level of her self-awareness. Hence, the focus here is on why she is in that particular action or state of mind. The psychological behaviour of an unevolved mind under Rajoguna and how she transforms to a sattvik personality through the yoga, of oneness with sound or ?nada? ? called nadayoga, is the central theme of Part II. The gradual inward progress, that silently unfolds the personality traits, bringing about a refinement in the awareness and how this silently guides the ego to its eternal resting place are analysed through her actions in Part II. The approach and conclusions are an inspiration from the books by Swami Chinmayananda, his explanations on the quality of thought and actions as discussed in Bhagavad Gita and Swami Sivananda?s explanations on Nadayoga.


Rekha Rao has a masters degree in Indology from the University of Mysore, India. Her interest in the temple sculptures has made her visit and study various temples in India. She has presented three research articles for the ?Visvakosha? ? the encyclopaedic work on ancient history and archaeology by the University of Mysore (forthcoming). She has also participated in subject related seminars and is the author of the book Therapeutics in Indian Sculptures ? Ranki Vav, Patan. Rekha Rao is an accomplished dancer in Bharatanatyam, Kathak and Kuchipudi styles and is well trained in Karnatic instrumental music. She has given several performances and choreographed dance items in India and abroad. She has the honour of ?Natyaratna? from The Academy of General Education, Manipal. Rekha Rao is widely travelled and enjoys studying historical monuments.