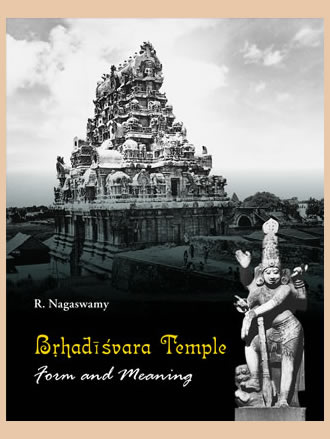 The Great Temple at Tanjavur is a visual representation of Cosmic power on earth that remains, according to the pious wish of the builder, so long as the sun and moon lasts. The God who inhabits this abode is said to be seated with his consort on the summit of the metaphysical mountain surrounded by a circle of peaks in which the divine power descends in diminishing potency as it comes down gradually and takes his abode at the peak of the circle, appropriate to his direction and also the relative importance in the hierarchy. So each peak is a virtual temple. This metaphysical mountain is called the great meru ? Mahameru, which forms the basic concept of the Brhadisvara temple of Tanjore. Meru, the mythical mountain is said to be a golden mountain. True to its nature, Rajaraja covered the superstructure of this temple with gold, that made this loftiest golden temple at that time. The images one sees on the upper tiers represented with bow and arrow in their arms are the innumerable Rudras called Sata-rudras, who are said to move in the upper spheres and represent the sun?s rays, a representation unique to this temple. This temple also portrays the five forms of Panca Brahmans ? Tatpurusa, Aghora, Sadyojata, Vamadeva and Isana, in individual sculptural forms and enshrined in the lower niches. With four sides of the sanctum provided with openings and its height exactly double its width at the base, the lofty tower fulfils all requirements of the Meru type of temple architecture. The Brhadisvara temple locates for the first time in Indian history, the 108 forms of n?tta karanas on the upper storey around the sanctum wall in sculptural form and reflects the concept of cosmic space in which Siva?s dance takes place. The available karanas are discussed in this volume for the first time in the light of Abhinavagupta?s commentary and also the views of modern scholars. Every structure in the temple is dated with the help of inscriptions. The story is taken through the centuries and its change in meaning and ritual are brought out in this volume which points out what a Hindu temple mean when in full form and through the centuries. The personality of the builder, the role of Rajaguru in planning and guidance and also the names of architects who designed and carved the sculptures and executed the lovely paintings are also furnished in this volume which makes it an invaluable work on the temple.


R. Nagaswamy (b. 1930) obtained Master of Arts in Sanskrit language and literature from the University of Madras and Doctorate from the Deccan College, Poona under Dr. H.D. Sankalia. He joined the Government Museum, Madras as the Curator for Art and Archaeology in 1959 and became the first Director of Archaeology of Tamil Nadu in 1966, in which capacity he served for 23 years, till his retirement in 1988. A multi-faceted personality, Dr. Nagaswamy has specialized in art, history, archaeology, epigraphy, conservation, religious history, ancient law and society, numismatics, classical music and dance. Along with Dr. Kapila Vatsyayana, he started the now world famous Chidambaram Natyanjali Festival. He has also produced several dance dramas, some of which were televised and broadcast several times. The most outstanding contribution of Dr. Nagaswamy to Indian Art is his appearance as an Expert Witness in the London High Court in the now famous London Nataraja Case wherein he gave crucial evidence on Hindu religion, temples, Indian art and epigraphy and Agamas that enabled India to win the case. Dr. Nagaswamy has conducted excavations at places like the Chola capital of Gangaikondacholapuram, Karur, Alagankulam and Korkai. He was the first to initiate under-water archaeological exploration at Pumpuhar in Tamil Nadu in collaboration with Oceanographic Survey. He has many publications and hundreds of research articles to his credit in English, Sanskrit and Tamil. His well-known publications include Masterpieces of South Indian Bronzes, Siva Bhakti, Tamil Coins, Tantric Cult in Tamil Nadu, Ancient Tamil Law and Society, Facets of South Indian Art and Architecture, Timeless Delight and others. A recipient of several public honours, Dr. Nagaswamy was conferred the title of ?Kalaimamani? by the Government of Tamil Nadu for his contribution to Art and Culture.