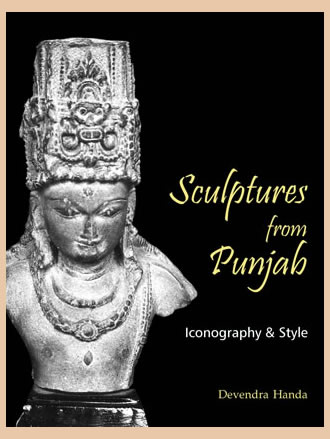 Punjab has almost been a terra incognita for long with regard to the sculptural art and not much is known even now except 57 railing pillars of Sanghol published by the National Museum, New Delhi. The remaining 60 pieces, some of which are aesthetically equally important, and some stray finds made now and then, have not received due attention which they deserved. Quite a few of the elegant and artistic sculptures have even been pilfered and are not traceable now. An effort has been made here to put everything together and present a coherent picture to the readers. Images published here throw fresh light on the culture, ethnology, trade, art and religious history of the region which have further been substantiated by literary, numismatic and epigraphic evidence. The Kushana railing pillars of Sanghol are a class by themselves and so are the Gupta terracottas from Ropar, Sanghol, Janer and Zahura. Medieval sculptures from Velore, Khanpur, Majhur, Janer, Dholbaha and other sites provide rare glimpses of the artistic, aesthetic and iconographic achievements of the artists. Metal images from Ropar, Bhudan, Sunam, Kharar and Ferozepur, mostly published for the first time, corroborate the evidence of marble images and throw new light on the impact and missionary activities of the Jaina monks from Rajasthan in Punjab. Stylistic and iconographic study of sculptures further reveals influence from Kashmir, Himachal Pradesh, Rajasthan, Madhya Pradesh, Uttar Pradesh and Uttarakhand. Unfinished images from Dholbaha reveal that it was a great centre of art during the medieval period. Karttikeya with Krittikas from Sanghol; Harihara, Siva with goose, Siva's head with long jata-juta and the Ramayana panel from Dholbaha; Nataraja from Bathinda; Mukha-Linga from Sultanpur Lodi; Uma-Mahesvara from Ghanauli; Vaikuntha-Lakshmi from Lalru; and Jaina figures from Bathinda, Bhudan, Ferozepur, Ropar and Sunam show interesting iconographical innovations. With 62 sketches and 338 plates, Sculptures from Punjab is the first comprehensive work on the subject resulting from author's sustained interest and study for more than the last four decades.