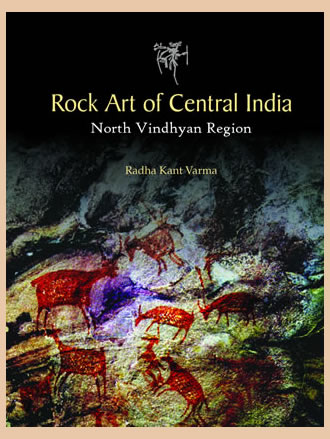 The present book is based on the explorations and excavations carried out by the author, his students and colleagues for over last five decades in the North Vindhyan region consisting of the present districts of south Varanasi (now Chandauli), Sonbhadra, Mirzapur, south Allahabad, Banda in U.P and Rewa, Satna, Sidhi and Shahadol in M.P. Since the discovery of ?Lekhunia (RJP)?, the first painted rock shelter in 1867-68 by Carlleyle in the then Mirzapur, a very large number of painted shelters have been discovered from time to time but no authentic account based on scientific documentation covering the entire region could be published. This region is no less important than the Bhimbetka region in so far as the prehistoric paintings are concerned. The shelters, too, are comparatively less disturbed. Most of the shelters were occupied during the Epipalaeolithic period and deserted soon after the Mesolithic phase. Thus most of the paintings belong to the Mesolithic period. A closer study of the paintings, based on detailed stratigraphic analysis of painted canvas, reveals how gradually the style of paintings underwent a cyclic evolution from naturalistic stage to stylistic and from stylistic to symbolic or cubist stage and finally back to naturalistic stage. A study of the subject matter of the paintings reveals that the painters were still in hunting/gathering stage of economy. On the basis of the available 14C dates from the excavated sites, the painting activity has been placed in a time bracket ranging from 14,000-13,000 bc to 2,000-1,500 bc. In the book, the author discusses the historicity, research and methodology, the technique, the styles, the subject matter and also description and location of some important painted shelters of the region. Illustrated with numerous sketches and photographs, which have tried to produce the colour nearest to the original, the book attempts to give an accurate impression of the rock art of the region. Profusely illustrated, this volume is meant for wide ranging specialists and students interested in human history and art. It will be of great help to researchers who wish to pursue further work in the area.


Dr. Radha Kant Varma, M.A., D. Phil., was formerly Professor and Head, Department of Ancient History, Culture and Archaeology, A.P.S. University, Rewa (M.P.); Vice-Chancellor, A.P.S. University, Rewa (M.P.); Chairman, Allahabad Museum Society (under Ministry of Culture, Govt. of India), Allahabad. He is an alumnus of Allahabad University. He learnt the methods of field archaeology at the site of Kausambi near Allahabad from Prof. G.R. Sharma. Prof H.D. Sankalia initiated him in the methods of Prehistoric Archaeology at the Deccan College, Pune. He served in the University of Allahabad for nearly 25 years before he was invited to join as Professor at the A.P.S. University, Rewa in 1985, for setting up a Department of Ancient History, Culture and Archaeology there. In the University of Allahabad, he was the first scholar to take up research in Prehistoric Archaeology. He obtained D. Phil. in Prehistory on his dissertation ?Stone Age Cultures of Mirzapur? in 1965 which included a detailed chapter on rock art. He explored the entire undivided district of Mirzapur and the adjoining places, revisited and documented all the sites earlier discovered by Carlleyle and Cockburn and discovered a large number of new sites located in the densely wooded Vindhyan hill ranges and river valleys. He excavated the painted rock shelters of Morahana Pahar and Baghahi Khor near Bhainsore village on the Great Deccan Road on the tri-junction of Allahabad, Mirzapur and Rewa in order to understand the antiquity and authorship of the prehistoric painters. He was the first scholar to initiate scientific archaeological methods for interpreting rock art. He tried to stratify each painted canvas in order to understand the evolutionary sequence in the paintings which covered a very long duration of time. Dr. Varma has written nine books and a large number of papers on different aspects of archaeology, art and culture. He has presented papers and keynote addresses in a number of important s