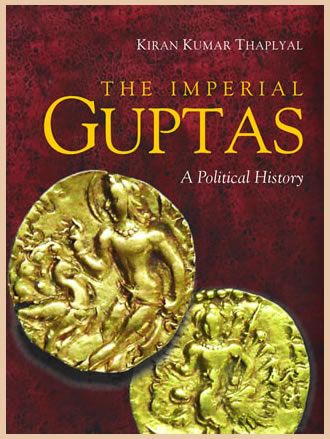 The present volume comprising 12 Chapters and six Appendices discusses Gupta history, based on the latest evidence. The problems discussed critically include: the name of the first king, the bearing of Chandragupta I?s marriage with Lichchhavi princess; authorship of Chandragupta I-Kumaradevi coins; identification and chronological position of Kacha; the Nalanda and Gaya copper plates of Samudragupta; significance of the epithet Lichchhavi-dauhitra; Samudragupta?s policy towards different powers; meaning of chir=otsan=asvamedh= ahartta; literary, numismatic and epigraphic evidences for the historicity of Ramagupta; marriage alliance of the Guptas with the Nagas and the Vaka?akas; epigraphic and numismatic evidences for Chandragupta II?s Saka conquest; identification of Chandra of Mehrauli inscription; the date, status and chronological position of Govindagupta; Gha?otkachagupta's marriage with a Vaka?aka princess, his status as governor of Kumaragupta I, his rebellion against him, and his short reign in Malwa; the struggle for, and the order of, sucession after Kumaragupta I ; the view of Skandagupta?s identification with Purugupta and that of the division of empire between them; name and status of Skandagupta?s mother; invasion of the Pushyamitras and the H?u?as; Torama?a?s occupation of Eran; identification of Prakasaditya; genealogy and chronology of Gupta kings; relationship between Prakasadharman and Yasodharman who defeated Torama?a and Mihirakula, respectively; identification of Baladitya, contemporary of Mihirakula; role of the Later Guptas, Maukharis, H?u?as and Yasodharman in the downfall of the Gupta empire; evidence for three Kumaraguptas; king?s name and date on the fifth Damodarpur copperplate; Jaina sources and epigraphs on the end of the Gupta rule.


Preface vii List of Illustrations xiii Roman Equivalents of Nagari Letters xv 1. Sources 1 2. Caste and Original Home of the Imperial Guptas 27 3. Maharaja Gupta to Maharajadhiraja Chandragupta I 42 4. Kacha: Identification and Chronological Position 69 5. Samudragupta: Expansion of the Empire 89 6. Ramagupta: From Legend to History 145 7. Chandragupta II: Further Expansion of the Empire 168 8. Govindagupta: Controversies Galore 199 9. Kumaragupta I and Rebel Gha?otkachagupta 215 10. Skandagupta: Triumph over the Invaders 239 11. Successors of Skandagupta: Phase of Decline 278 12. Factors Leading to the Decline and Fall of the Gupta Empire 332 Appendices 349 I. Chandragupta I-Kumaradevi Type of Coins 349 II. Reappraisal of the Evidence Relating to the Asvamedha of Samudragupta 365 III. King Chandra of the Mehrauli Pillar Inscription 379 IV. The Gupta Era 399 V. Genealogy and Chronology of the Imperial Gupta Kings 406 VI. Imperial Gupta Kings vis-a-vis Scions of the Feudal Family of Kausambi 415 Plates (I-VIII) 427 Bibliography A. List of Inscriptions 429 B. Select Books and Articles 434 Index 447


Professor Kiran Kumar Thaplyal (b. 1936), after obtaining first class first Master?s degree in Ancient Indian History and Archaeology (1957, Lucknow University), served Archaeological Survey of India (1957-60), and later Lucknow University (1960-96) as Lecturer, Reader, Professor and Head of the Department of Ancient Indian History and Archaeology, Dean, Faculty of Arts, and Emeritus Professor. Epigraphy was one of the subjects he taught to the post-graduate students. He is recipient of several Scholarships, Fellowships, and gold medals including one for the best Ph.D. thesis. He was a Visiting Fellow at the Vikram University, Ujjain, and at Kurukshetra University, a Fellow of the Indian Institute of Advanced Study, Shimla, and a member of Central Advisory Board for Archaeology. He has been honoured with Brahmi award for his contributions to Indology. In 2007, Lucknow University felicitated him for his ?contribution to knowledge and development?. The Numismatic Society of India elected him its General President (2007), and awarded him Altekar Silver Medal (2010). In 2007, his friends and admirers brought out a Felicitation Volume in his honour. He has published more than 100 research papers, and edited Jaina Vidya and Select Battles in Indian History (2 vols.). The books authored by him include Studies in Ancient Indian Seals; Inscriptions of the Maukharis, Later Guptas, Pu?pabh?utis and Yasovarman of Kanauj; Sindhu Sabhyata; Jaina Paintings; Guilds in Ancient India; Coins of Ancient India (jointly); Village and Village Life in Ancient India.