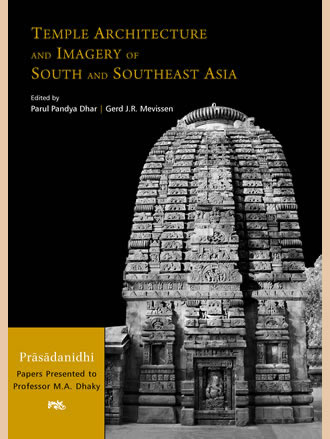 This volume is a tribute to Professor M.A. Dhaky's profound and influential scholarship by an international community of well-known scholars in the field of South and Southeast Asian temple art and architecture. The thirty-two essays that make this book unfold many layers of the temples' imagery, taking a broad view and traversing religious, cultural, and temporal boundaries. While a majority of these are rooted in India, Afghanistan, Pakistan, Tibet, Nepal, Cambodia, and Vietnam also figure prominently. Preceded by valuable insights into M.A. Dhaky's encyclopaedic writings, the volume is configured along six sub-themes inspired by his contributions to the discipline. These include the architectonics of temples, their varied materials and milieus, stylistics, patronage and transregional connections; studies of architectural elements in culture-specific contexts; inter-relationships between sculpture and architecture in the temple's larger narrative; the embodiment of cult icons; other non-cultic manifestations on the temple; ritual observances and performance traditions. Several of the essays move in and out of M.A. Dhaky's writings, building upon themes addressed by him, extending his methods to newer materials, regions, and time-frames, and charting fresh paths that extend the orbit of temple studies. Scholars and interested readers will find in this volume a thoughtful and cohesive collection of the most recent and insightful research on art historical aspects of South and Southeast Asian temples by the finest minds engaged in the field.


Parul Pandya Dhar, Associate Professor in the Department of History, University of Delhi, specializes in the history of ancient and medieval Indian architecture and sculpture and artistic exchange between South and Southeast Asia. An Alexander von Humboldt Research Fellow in Indian Art History, Germany (2007-08), she has developed and taught specialized courses at the intersection of art and history at post-graduate and research levels. Her academic commitment to visual art histories is complemented by years of training, performances, and lecture-demonstrations in classical Indian dance in India and abroad. Her books include The Tora?a in Indian and Southeast Asian Architecture (2010, authored), Indian Art History: Changing Perspectives (2011, edited), and Asian Encounters: Exploring Connected Histories (2014, co-edited) among other research writings and projects. Gerd J.R. Mevissen is an independent researcher affiliated to the Asian Art Museum, Berlin, Germany. He studied Architecture at the Technische Universit?t Berlin (Dipl.-Ing. Arch., 1974-80), and Indian Art History at the Freie Universit?t Berlin (M.A., 1985-90). He served as Lecturer at the former Institut f?r Indische Philologie und Kunstgeschichte (Institute unjustifiably discontinued), Freie Universit?t Berlin (1990-95), and as Assistant Curator at the former Museum f?r Indische Kunst, Berlin (2000-02). He is executive editor of the research journals Berliner Indologische Studien (since 1995) and Indo-Asiatische Zeitschrift (since 1997), has edited several volumes of collected papers (since 1991), and published about 70 studies on aspects of ancient Indian art and iconography (Hindu, Buddhist, Jain), focusing on systematic documentation of groups of minor deities.