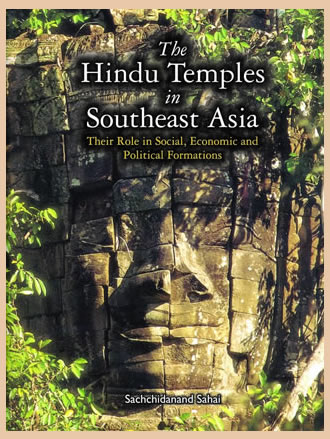 Many thousand temples, built within a time span of about thousand years, before the fourteenth century, stand as witness to the creative genius of different communities of Southeast Asia. They also testify to the cultural dialogue between India and Southeast Asia centered on the architectural and planning experiences as coded in the silpasastra texts of India. The present monograph looks at the Khmer temples of Hindu inspiration spread over mainland Southeast Asia both at the level of ideology and praxis, and attempts an integrated account of their symbolical as well as functional aspects. In the selection and regrouping of temples for the present study, the three key words?social, economic and political formations?have been the driving motive. The temples or the group of temples which explicate their role in these basic formations of human civilization have, therefore, been taken up in this monograph. This monograph offers a chapter devoted to various aspects of temples in the Khmer mainland of Southeast Asia. The first chapter examines the evolution of temples in the region from the open-air sacred spaces. The following chapter sees the temple as an architectural search for the centre, analyses the ideology of Meru and presents 13 examples of temple-mountains. The temple?s catalytic role in the formation of village and city forms the theme of the next two chapters. The temple-based process of the formation of capital and means of production concerns the following chapter. The vital role of temple in manpower mobilization for agricultural expansion has been closely examined in the succeeding chapter. The next chapter examines the interlink between water and architecture with a particular reference to the hydraulic debate. The temple as a Sanskritizing agent forms the theme of the last chapter. This narrative has developed from a synchronic and simultaneous reading of verbal and visual languages.


Sachchidanand Sahai is an alumnus of Banaras Hindu University (1962). He did his research in the University of Paris, Sorbonne (1965-69) under the supervision of eminent French savant George Caedes and produced a pioneering doctoral thesis, published as Les institutions politiques et l'organisation administrative du Cambodge ancien, Paris: EFEO, 1971. His other publications?The Phra Lak Phra Lam (1973), The Ramayana in Laos (1976), The Krishna Saga in Laos (1978), The Rama Jataka in Laos (1997)?are based on a first-hand study of original palm-leaf manuscripts in the old Laotian language. India in 1872 as Seen by the Siamese (2001) reconstitutes the unwritten chapter of Thai history relating to King Chulalongkorn's visit to British India in that year. The Mekong: Space and Social Theory (2005), The Bayon of Angkor Thom (2007), a co-authored book Ta Prohm: A Glorious Era in Angkor Civilization (2007) and Preah Vihear: An Introduction to the World Heritage Monument (2009), and Sivapada in Khmer Art: Rediscovering Angkor in the Footprints of Shiva (Bangkok: White Lotus, 2011) are his other publications. As founder of the Southeast Asian Review, Sahai has edited and published thirty-two volumes of this journal since 1976. In 1981, he founded the International Conference on Thai Studies. Sahai held the Chair of Southeast Asian Studies at the Magadh University, Bodh Gaya (India) and worked as the Pro Vice Chancellor of the university in 2001. He has also worked as Fellow, Indian Institute of Advanced Study, Shimla (2003-2006); Research Professor at Indira Gandhi National Centre for the Arts, New Delhi (1988-90); and Visiting Professor of Asian Civilization at Sisavangvong University, Vientiane (1970-73). Recipient of French Government scholarship, Fulbright post-doctoral Fellowship, Visiting Fellowship at Australian National University and Maison de Science de l'Homme (Paris), Pravasi Bhartiya Samman and Padmashri Award (2012), Sahai is currently Advisor, APSARA Nationa

write a review (THE HINDU TEMPLES IN...) Please Login!