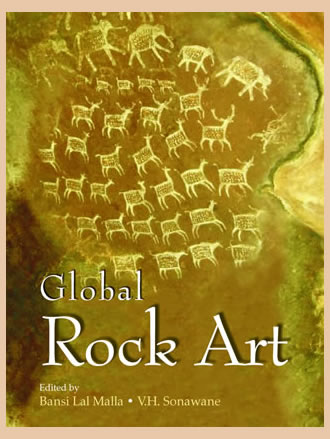 The vast corpus of rock art that occurs in most of the countries of the world serves as an almost universal expression and communication of human thought since the dawn of humanity. It is one of our greatest surviving art treasures. The intrinsic efficacy of rock art lies in its universality of appeal and to endure and sustain in a manner in which all can discern it. Until recent past, the content of rock art has been much commented on as an indicator of the stage of development of the makers of the rock art. But now, for quite some time, the attempts are being made by many scholars to explore the possibility of the proximity of rock art with the art of many living communities of the world, such as the indigenous people, the aboriginals, the tribals and the nomads. This volume is the outcome of the Global Rock Art Conference held under the auspices of the Indira Gandhi National Centre for the Arts (IGNCA), New Delhi. The volume comprises valuable contributions from several scholars from all over the world such as Argentina, Australia, Austria, Bolivia, Canada, China, England, France, Germany, Kenya, Russia, Saudi Arabia, Slovakia, USA and India. The interest of this publication lies not only in the greatest number of subjects treated but in the diversity of approaches. Almost all stages of research are represented. The major interlocking and overlapping themes have been grouped under the following eight sections: (1) Understanding rock art in a universal frame; (2) Country reports from China, India, Jordan and Saudi Arabia; (3) Cross-cultural comparison; (4) Environment, management, conservation and documentation; (5) Classification, chronology and standardisation; (6) Consideration of context; (7) Form, content and interpretation including language of symbols, religious themes and musical subjects; and (8) Artificial intelligence and rock art research. The present illustrated volume will not only interest the scholars but also the public at large. It will certainly contribute to rectify our vision of rock art. It is also an important step in the journey of exploring together, globally, the source of creative energies and modes of expressions of our ancestors.


Dr. Bansi Lal Malla, an art historian, is associated with the Indira Gandhi National Centre for the Arts, New Delhi. His areas of interest include both classical and vernacular traditions. He has been associated with the IGNCA-UNESCO-UNDP project on ?Village India?. Dr. Malla is the author of a number of books including The Sculptures of Kashmir, Vaisnava Art and Iconography of Kashmir, Trees in Indian Art Mythology and Folklore, Conservation of Rock Art (ed.), Cosmology and Cosmic Manifestations: A Study in Shaiva Art and Thought of Kashmir (in press) and of a number of research articles published in professional journals. Dr. Malla has participated in a number of national and international conferences/workshops and has widely travelled in India, France, Italy and Iran in connection with his field studies and conferences. Currently, Dr. Malla is engaged in the survey, documentation and study of Indian rock art and also in Himalayan studies. Prof. V.H. Sonawane retired as Professor of Archaeology from the Maharaja Sayajirao University of Baroda, where he was also the Director of Field Archaeology. He has 36 years of experience during which he extensively worked on various aspects of prehistoric, protohistoric and historic archaeology besides rock art including the discovery of more than 100 Harappan and Chalcolithic settlements and several rock art sites in Gujarat. Prof. Sonawane was also the coordinator of the UGC-SAP (Phase-I: 2002-07) at the Department of Archaeology and Ancient History, Maharaja Sayajirao University. He has completed a project on the ?Investigation of Rock Art of Western India with Specific Reference to Gujarat? and presently working on ?Symbolism of Rock Art in India?. Prof. Sonawane has presented a number of papers in various national and international seminars and almost 100 of his articles/ research papers have been published in national and international journals.