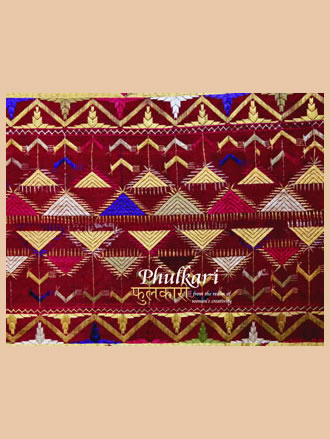 India has a great tradition of embroidery prevalent in each and every region; each of them different from the other. There are several embroidery styles, which have become popular nationally and internationally and have become synonymous to the region they come from. For example, Kashmir is known for amlikar work on shawls, Himachal Pradesh for Chamba rumal, Uttar Pradesh for chikan work, Gujarat for mochi work and Punjab for phulkari. Each one has its own characteristics and phulkari stands out to be different among all these. Phulkari is a very refined embroidery work of Punjab and Haryana. It has more emotional, social and cultural value which is very rare. Embroidered with silk thread on cotton base, phulkari is a shawl made by the mother for her young daughter or daughter-in-law. Phulkari literally means floral work and is also called Bagh, which literally means a garden. In the olden times, accomplishment of a bride and her mother was judged by the beautiful phulkari and bagh they made. Even the affluence of the families was judged by the number and work of phulkari and bagh they gave to their daughters in their trousseau. They also made ceremonial pieces which were used in marriages, at the time of birth of a child and during festive occasions. Phulkaris are known for their vibrant colours, geometric pattern and gaiety which are an integral part of the life and tradition of the people of Punjab. The present volume catalogues and documents the selected and rare pieces of Phulkari from the archives of Indira Gandhi National Centre for the Arts (IGNCA).

Ms. Krishna Lal (M.A. History from Aligarh University) served in the Department of Decorative Arts and Textiles for 34 years in the National Museum, New Delhi. Ms. Lal has participated in several seminars and international conferences held in U.K., Mexico and Greece and presented papers there. In addition to co-ordinating several national and international exhibitions, she was an active participant in the Festival of India Exhibitions in U.K., France and the U.S.S.R. during 1982-88. Her publications include a catalogue on Bidriware in the National Museum Collection, New Delhi (1990); two catalogues on Indian Decorative Arts, published in German (1985), and in Russian (1987); Tourism, Museums and Monuments in India (1974, co-author); Cultural Tourism in India (2003, co-author) and Peacock in Indian Art, Thought and Literature (2006).

write a review (PHULKARI: From the Realm...) Please Login!