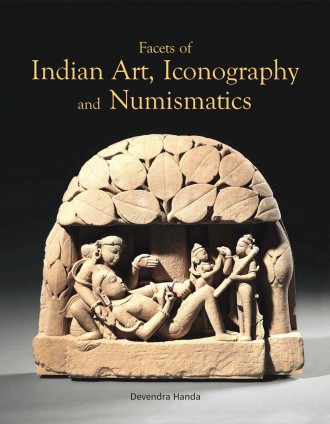 This book contains sixteen essays on different aspects of Indian art, iconography and numismatics. The first one deals with the literary history of Svayambhu Brahma, the god of creation, referring to his earliest representations in stone and clay, pushing back the antiquity of his portrayal to second century bce on numismatic evidence and delineating his different roles as known through sculptural art. Numerous terracottas of different types from Sugh near Yamunanagar in Haryana published here will establish its place comparable to Ahichchhatra, Kaushambi and Mathura. The site has yielded evidence of the earliest portrayal and deification of Rama and Hanuman, the former corroborated by numismatic evidence also going back to second century bce. Glyptics from Sanghol prove that the multiplication of hands of Siva started in the Parthian period and also portray the god as holding trident and sword. Sword in Siva’s hand at such an early period is a rare occurrence and has been explained with reference to literary evidence from the Mahabharata. Terracotta figurines of Mahishamardini from Haryana indicate her popularity in the region through the centuries and the changes in her artistic representations. Bachoonch in Himachal preserves a very rare sculpture of Mahishamardini killing the demon in human form with buffalo totally absent in the relief. Relics from Ahrwan in Palwal district show that it was an important Buddhist centre during the Kushan period. Terracottas from Agroha establish it as a great religious and art centre in the early period. Evidence of itinerant artists is provided by Gupta image of Jaina yaksha Parsva from village Murti in the Salt Range in Pakistan. Evidence of the popularity of the epics in Haryana comes to us from the early medieval depiction of epic scenes from a lost temple at Pehowa, the ancient Prithudaka. Hat Koti in Himachal has preserved an unusual image of Vishnu. The importance of auspiciousness of tortoise, lotus and conch as enunciated in literature, thought and art has been brought out in the next three essays. Glyptics from Kurukshetra have brought to light the artistic form of hitherto unknown deity Sannihitadevi mentioned in the Mahabharata. Very rare images of Satyavan-Savitri and Ardhanarisvara form the subject matter of the last two essays. Facts and statements have been substantiated, documented and illustrated with 49 line-drawings and 163 plates. Bibliography and Index enhance the usability of the work further.

Devendra Handa is an eminent art historian and numismatist. He is the recipient of Sir Mortimer Wheeler Prize; Maulana Azad, Archaeological Centenary Commemoration, Pt. Bhagwanlal Indraji and Nelson Wright medals; N.M. Lowick grant (twice in 1992 and 2005) of the Royal Numismatic Society, London; Fellowship of the Indian Institute of Advanced Study, Shimla (2000-2003), Senior Fellowship (Numismatics) of the Ministry of Culture, Government of India (2003-05) and Senior Academic Fellowship of the Indian Council of Historical Research, New Delhi (2009-11). He presided over the 88th Annual Conference of the Numismatic Society of India at Nagpur in 2004; Seminar on Coinage of the North-West India at Chandigarh in 2005; Annual Session of the Centre for History, Archaeology, Epigraphy and Numismatics of the University of Mumbai in 2018 and Annual Session of the Indian Art History Congress at Patiala in 2019. The Numismatic Society of India, the Indian Coin Society and the Gwalior Chapter of INTACH; Numismatic Research Institute, Nagpur and the International Collectors’ Society of Rare Items, Pune have bestowed upon him Lifetime Achievement Awards. Haryana Institute of Fine Arts honoured him with Karmayogi Samman in 2011-12 and the Buddhist Society of Haryana felicitated him for his contribution to Buddhist studies in the state in that year. He has attended numerous national and international conferences and delivered lectures in various universities, museums and research institutes. He has contributed articles, research papers, notes, etc. to various national and international journals; to the multi-volume Encyclopedia of Hinduism of the Indian Heritage Research Foundation, Parmarth Niketan, Rishikesh; various felicitation and commemoration volumes and some chapters to the eleven-volume series ‘A History of Ancient India’ being published by the Vivekananda International Foundation and Aryan Books International. Presently he is