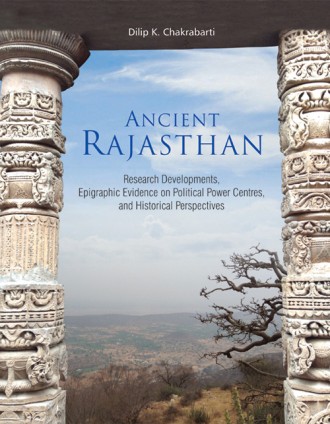 This volume begins by offering a detailed review of the major stages and character of ancient historical research in Rajasthan till c.1950, highlighting the way in which this research had distinguishing features of its own and how James Tod played a stellar role in the process of establishing Rajasthan as a distinct field of scholarly enquiry. In the next part, the problem has been to understand the location of the Asokan centre of Bairat in relation to its links both with Delhi where a Minor Rock Edict is located and with Ujjain in western Malwa from where the route to the Deccan is fairly open. The fact that a section of the Deccan routes was reaching Bairat in Alwar, and through Bairat, Delhi is an important point in the study of ancient Indian historical geography. The volume then takes up the issue of the ancient political power centres of the region on the basis of the surviving inscriptions. While doing so, the volume examines some geographical and commercial points in the early gazetteers of Rajputana and also establishes the premise that the Aravalli region was an independent area of both food-production and copper metallurgy. The inscriptions are then subjected to close scrutiny with attention to some of the terms commonly used in this context – 'feudalism', 'origin of Rajputs', 'early mediaeval' and 'state formation'. The inscriptional data is examined both in the light of their basic geography and history and show the inadequacy and illogicality of these terms to explain Rajasthan's history.


Dilip Kumar Chakrabarti is Emeritus Professor of South Asian Archaeology at Cambridge University where he has also been a Senior Fellow of McDonald Institute for Archaeological Research. He is associated with Vivekananda International Foundation, a major think tank of Delhi, as Distinguished Fellow and editor of its eleven volume series on the history of ancient India.
Born in 1941, Professor Chakrabarti was educated at Calcutta University where he was awarded Ph.D. in Archaeology in 1973. He held appointments in Calcutta University (1963-77), Delhi University (1977-90) and Visva Bharati (1980-81) before he joined Cambridge University in 1990 and retired from there in 2008. During this period he also held scholarships, fellowships and teaching assignments in Cambridge, Edinburgh, Tehran, New York, Paris, Jahangirnagar in Bangladesh, and Armidale in Australia. He lectured at several Indian universities including Allahabad, Banaras, Delhi, Pondicherry and Visva Bharati. He attended a number of conferences in India, UK, USA, USSR and China. He successfully supervised many graduate students in Delhi and Cambridge.
Professor Chakrabarti's research has been characterised by originality, scholarship and a solid grip of the historical problems involved. Nobody of his generation has been as steadfast in trying to understand the historical and archaeological nuances of the subcontinent as he has been throughout his career. In addition to 200-odd articles and reviews, he has so far published 29 authored books and 12 edited volumes (under single/multiple editorship).
He has received a number of honours : D.Litt. (Honoris Causa) of M.J.P. Rohilkhand University, Bareilly, Dr. V.S. Wakankar Rashtriya Samman (State honour) of Madhya Pradesh government in Archaeology, S.C. Chakrabarti medal of Asiatic Society, Kolkata, fellowship and Senarath Paranavitana award of the International Association of Asian Heritage, Sri Lanka, and Gurudev Ranade award of the&