Home / History / / A HISTORY OF THE MOGHULS OF CENTRAL ASIA: The Tarikh-i-Rashidi of Mirza Mummad Haidar, Dughlat (Set of 2 Vols.) 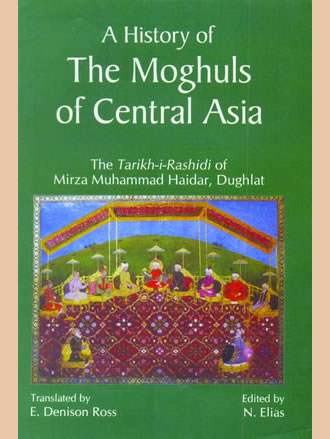 The present work in two volumes is the English translation of Tarikh-i-Rashidi, written by Mirza Muhammad Haidar, Dulghat. The book brings forth an absorbing and informative history of Central Asia. The Object of the Tarikh-i-Rashidi, as the author tells his readers, is to preserve the memory of Moghuls and their Khans. The author, Mirza Haidar, has attempted a very minute and first hand account of the region which reveals it both in depth and on a personal level. The work is an earnest one, and the author, no doubt intented that it should be before everything else, a clear and complete exposition of the times he had set himself to chronicle. The scope and character of the Tarikh-i-Rashidi may be briefly summarised in the following way. It may be regarded as the history of that branch of Moghul Khans who separated themselves, about the year 1321, from the main system of the Chaghatai, which was then the ruling dynasty in Transoxiana; and it is the only history known to exist of this branch of the Moghuls. The original, or western line-that of Transoxiana-was at that time declining in power, and through internal dissensions and administrative decay, was rapidly approaching a final dissolution. The princes of the branch then thrown off, became masters of Moghulistan (or Jatah, as it was called at that period) and of all Eastern Turkistan, and continued as a ruling dynasty for more than two and a half centuries. The book is divided into two parts, called Daftar, the first of which is entirely historical, while the second contains reminiscences of the author?s life and notices of Chaghatai, Uzbeg and other princes, with whom he was acquainted. The first Part, or history proper, was written in Kashmir in 1544 and 1545. It contains a record of two distinct and parallel dynasties: (1) that of the Khan of Moghulistan, beginning with Tughluk Timur, who reigned from 1347 to 1362, and whose father, Isan Bugha, was the first to separate from the main Chaghatai stem; and (2) of their vassals, the Dughlat Amirs of Eastern Turkistan, one of the earliest of whom, Amir Bulaji the author?s ancestor, had raised Tughluk Timur to the Khanship. The second Part, which has more than twice the extent of the first, and contains Mirza Haider?s record of his life and times, was the first in point of date. It begins with his birth and concludes with an account of his second invasion of Kashmir, when by a battle fought on the 2nd August, 1541, he became master of the country. This Part also includes some rules of conduct for kings, drawn up at that request of the author, by his spiritual guide, Maulana Muhammad Kazi. The book is thus a work of great historical importance and would interest historians, explorers, scholars and general readers.

write a review (A HISTORY OF THE MOGHULS...) Please Login!