Home / Reference/Multi-volume Sets / Illustrated Encyclopaedia of PEOPLE AND CULTURES OF THE WORLD (Set of 6 vols.) 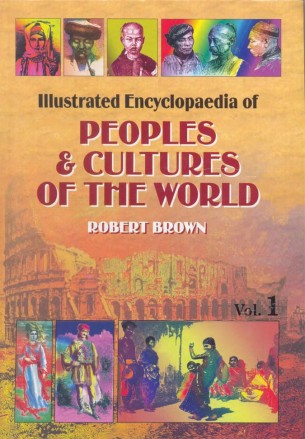 The Illustrated Encyclopaedia of Peoples and Cultures of the World is the first comprehensive encyclopaedia seeking to present in totality the peoples and cultures of the world. It is unique as it covers in fascinating detail every aspect of peoples of the world, their general characteristics, beliefs, traditions, customs, art, music, architecture etc. supplemented by meticulously drawn illustrations. It is the result of careful observation through research and years of travel and is the first authoritative study of the peoples of different well known countries of the world and little known far-flung islands and their several cultures including their origin and evolution. It has abstained from the traditional format of alphabetical order and chosen chapters so as the allot each group of people enough space to highlight their contribution to the evolution of mankind; in the sense it is without parallel. This encyclopaedia does not rest content with describing peoples and their cultures but provides further information on how a settled culture undergoes changes when it faces an alien culture. The most notable features of this encyclopaedia are: the interplay of forces of land, climate and environment in the formation of special traits of communities and how these traits undergo changes setting in motion catalytic transformation of cultures and their ultimate fusion into a new culture retaining the best features of the old. Spanning all countries and cultures this is a genuinely international encyclopaedia. It is an indispensable reference work; the simplicity and clarity of its presentation makes it enchanting to read. Superbly illustrated throughout, the encyclopaedia will prove to be an invaluable asset not only to academicians, researchers, libraries, museums and designers of all disciplines but also to the wider public as it covers almost every area of human interest. Vol. I. Describes the peoples of North, Central and South America such as the Eskimos, Comanches, Apaches, Pimas, Papagos, Azteks, Brazilian, Bolivian, Peruvian, etc. and the present mixture of European and native tribes and their cultures. Vol. II. Covers the communities of the Pacific Ocean islands, Australia, Tasmania, the Malay archipelago, Egypt and various areas in North Africa. Vol. III. The peoples and cultures of Central, West, South Africa like the Negroes, Ffons, Egbas, Gaboons and also the Persian Iranian group including Kurds,Baluchis, Afghans,etc. form the theme here. Vol. IV. India is virtually an ethnological museum. This aspect is portrayed in great detail. Also the inhabitants of China, Tibet, Burma, Sri Lanka and Mangolia are brought to limelight. Vol. V. Deals with the peoples of Europe like Circassians, Georgians, Magyars, Gypsies, Celts and the various communities such as Camorra, Neapolitans, Corsicans, Sardinians, Maltese, etc. of Italian peninsula and surrounding islands. Vol. VI. The focus here is on the French, Spaniards, Portugese, Romanians, Swiss, Greeks, Albanians, Slavs, Germans, Dutch, Scandinavians and English.