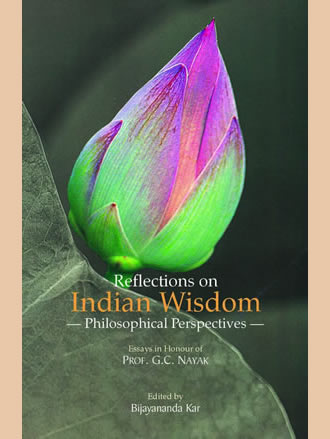 Reflections on Indian Wisdom is a stimulative survey of different aspects of Indian wisdom and philosophy and it contains seventeen reflective essays by reputed Indological researchers, both from India and abroad. The issues raised in the essays pertain to metaphysics, theology, philosophy of religion, philosophy of language and socio-political philosophy. The book constitutes the literary tributes from the admirers, colleagues and pupils of Prof. G.C. Nayak, one of the foremost Indologist of the country. Perceptive, insightful and reflective, the book will prove to be an invaluable asset not only to academicians, orientalists, researchers and libraries but also to the lay readers.


Prof. Bijayananda Kar, is retired Professor and Head of the P.G. Department of Special Assistance in Philosophy at Utkal University, Bhubaneswar. He was UGC Emeritus Fellow and member of the Indian Council of Philosophical Research. He is one of the few Indian scholars doing intense analytical study of Indian philosophical issues and problems (both traditional and modern). His principal publications are: Analysis in ?a?kara Ved?nta (Ed.) (2006), ICPR, New Delhi; Value Perspectives in Indian Philosophy (2002); Indian Theories of Error (1st edn., 1978, 2nd U.S. edn., 1994); Indian Philosophy: An Analytical Study (1st edn., 1992, U.S. edn., 1994); Analytical Studies in the S??khya Philosophy (1st edn., 1977 and 2nd edn., 1998); Major Trends in Orissan Philosophy (1990); S??khya Darshana (1976) and Dharma, Dar?ana O M?navat?v?da (1st edn., 1975, 2nd edn., 2004). Besides, Dr. Kar is credited with more than hundred and fifty research articles and reviews, published in leading academic journals, both in India and abroad. At present, Prof. Kar is a Fellow in the Indian Institute of Advanced Study, Shimla.